Democratic Decline in Hungary
Law and Society in an Illiberal Democracy 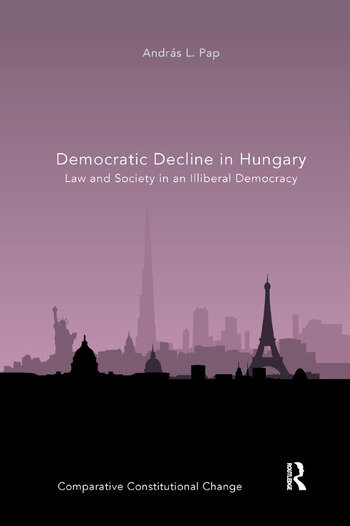 Democratic Decline in Hungary: Law and Society in an Illiberal Democracy

This book shows the rise and morphology of a self-identified `illiberal democracy’, the first 21st century illiberal political regime arising in the European Union. Since 2010, Viktor Orbán’s governments in Hungary have convincingly offered an anti-modernist and anti-cosmopolitan/anti-European Unionist rhetoric, discourse and constitutional identity to challenge neo-liberal democracy. The Hungarian case provides unique observation points for students of transitology, especially those who are interested in states which are to abandon pathways of liberal democracy.

The author demonstrates how illiberalism is present both in `how’ and `what’ is being done: the style, format and procedure of legislation; as well as the substance: the dismantling of institutional rule of law guarantees and the weakening of checks and balances. The book also discusses the ideological commitments and constitutionally framed and cemented value preferences, and a reconstituted and re-conceptualized relationship between the state and its citizens, which is not evidently supported by Hungarians’ value system and life-style choices.

Part I. Chronology and explanations: what happened in Hungary in 2010–2012

Chapter 1. Democratic U-turn, the chronology of building an illiberal democracy

1. Meanwhile in Hungary: An illiberal democracy in the making

4. Expanding the electorate and gerrymandering

5. And the new constitution…

2. Orbán and his strategy: The rhetoric and politics of the "dark side"

3. A little help from the constitutional structure…

Part II. The microfabric of the Hungarian illiberal democracy’

2. Illiberalism and the emergence of a new political community: The System of National Cooperation

3. Illiberalism and the System of National Cooperation

Chapter 4. Intimate citizenship and value preferences in the new constitution

1. The SNC as a workfare state

2. The SNC as a Christian state

3. Family in the SNC

4. Equality of intimate citizenship in the SNC

5. Reproductive rights in the SNC

5. Paternalism and essentialism in the SNC

1. Illiberal transnationalism: The nation and the constitution in internal and external homelands

2. Illiberal multiculturalism: The nation and the minorities

Chapter 6. Communitarians, dignity, and privacy: personhood and transparency in the System of National Cooperation

1. Communities as primary agents of dignity

2. Liberal instruments for illiberal objectives: privacy as a tool to obstruct public accountability and to protect the dignity of government institutions and officials

3. Privacy as a tool for ethnic discrimination and marginalization

"Fittingly described by the author as ‘a diary of a constitutional scholar,’ this book offers an important critical account about key constitutional and political developments that shaped the emergence of ‘illiberal democracy’ in Hungary in 2010-11. The analysis reflects an impressive breadth of knowledge coupled with deep commitment to the principles of liberal democracy. The book should be of great interest to scholars, students, and policy-makers interested in the future of democratic government in post-Cold War Europe."

"Pap’s fascinating and timely Democratic Decline shows how defensible laws and democratic processes can be used to construct illiberalism. Most interesting is how the Hungarian 'System of National Cooperation,' an ideology that puts the national above the political community and has parallels with other European populisms, impacts an incredible range of policies that serve to privilege Christian, middle-class families and protect the state against individual rights claims."

"As one of the first and most corrosive expressions of the antiliberal Zeitgeist proliferating across today’s world, Viktor Orbán’s "illiberal democracy" should be of concern to every politically responsible citizen in every struggling Western democracy. To understand what is at stake, no English-language work is more timely and more illuminating that András Pap’s original and biting analysis of Hungary’s plunge into constitutional antiliberalism."