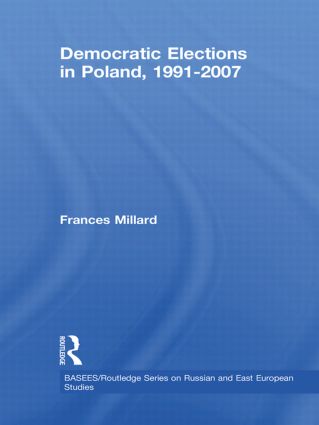 This book is a political history of democratic elections in Poland from the first fully competitive parliamentary elections in 1991 to the unexpected, most recent election in 2007. Until now, there has been no equivalent study covering similar developments in this, or any other, post-communist country; this book fills the gap and provides a detailed electoral perspective on the trajectory of political development in the context of post-authoritarian change. It also provides an invaluable account of the evolution of electoral processes and institution-building in the context of democratic regime development. The major themes of the book centre on the complex, problematic development of Poland’s political parties and the parties’ failure to gain public support and win the confidence of the electorate. Frances Millard examines the failure of Polish elites; the lack of a stable party system and how elections have had a destabilizing effect, and she argues that the interaction of leadership volatility, party volatility, and electoral volatility have created uncertainty and undermined political parties as effective vehicles of representation. Poland is a large and important country, worthy of study in its own right, but equally many of the problems experienced are not unique to Poland; so this book also constitutes a comparative benchmark for analysis of democratic developments elsewhere.

"Frances Millard’s new book is destined to become an invaluable resource for all scholars of Polish politics in the years to come. Indeed, it should be required reading, not just for those who study Poland primarily, but for anyone who ever wants to include a Polish election in a cross-national analysis… I found myself wishing there was an equivalent volume for every other postcommunist country!" - Joshua A. Tucker, New York University, "Slavic Review," vol. 70, no.1 (Spring 2011)

"The book is certainly a definitive case study, but it is also useful for general studies of elections, party politics, and party systems. Summing Up: Highly recommended. Upper-division undergraduate, graduate, and research collections." - A. Siaroff, CHOICE (July 2010)

"Millard presents a fascinating and detailed analysis of the Polish political landscape from the first free parliamentary elections to developments in the Polish party system and its democratic processes… it will make definitive reading for political scientists with an interest in elections, party systems and Poland, but will also be of interest to non-specialists." - S. Guerra, Department of Politics, History and International Relations, Loughborough University; Slavonic and East European Review (vol. 90, no. 1, January 2012).

Frances Millard is Professor in the Department of Government at the University of Essex. Widely regarded as an expert in the political and social developments of post-communist states, her book, Elections, Parties and Representation, won the George Blazyca Prize of the British Association of Slavonic and East European Studies in 2007.