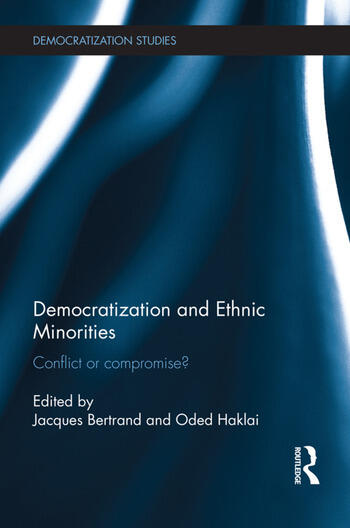 Many new democracies are characterized by majority dominance and ethnocentrism. Varying paths or transitions toward democracy create very different outcomes for how ethnic identities, communities and politics are recognized. This book illustrates the varied consequences of democratization, from ethnic violence, new forms of accommodation to improve minorities’ status, or sometimes only minor improvements to life for ethnic minorities.

The book treads a nuanced path between conflicting myths of democratization, illustrating that there are a variety of outcomes ranging from violence or stability, to the extension of rights, representation, and new resources for ethnic minorities. Contributors discuss the complex mechanisms that determine the impact of democratization of ethnic minorities through five factors; inherited legacies from the pre-transition period, institutional configurations, elite strategies, societal organization and international influences. Global in scope, this book features a broad range of case studies, both country specific and regional, including chapters on Nigeria, Kenya, Turkey and Taiwan, Eastern Europe, the former Soviet Union, Southeast and East Asia.

This book provides new insights and makes at important contribution to existing debates. Democratization and Ethnic Minorities will be essential reading for students and scholars of democratization, nationalism, ethnic conflict and ethnic politics, political science, history, and sociology.

Jacques Bertrand is Associate Professor of Political Science at the University of Toronto, Canada.

Oded Haklai is Associate Professor in the Department of Political Studies at Queen’s University, Canada.