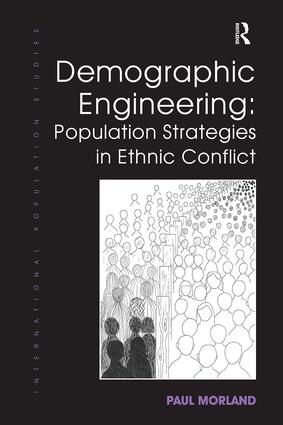 Demography has always mattered in conflict, but with conflict increasingly of an inter-ethnic nature, with sharper demographic differences between ethnic groups and with the spread of democracy, numbers count in conflict now more than ever. This book argues for and develops a framework for demographic engineering which provides a fresh perspective for looking at political events in countries where ethnicity matters. It asks how policies have been framed and implemented to change the demography of ethnic groups on the ground in their own interests. It also examines how successful these policies have been, focusing on the cases of Sri Lanka, Israel/Palestine, Northern Ireland and the USA. Often these policies are hidden but author Paul Morland teases them out with skill both from the statistics and documentary records and through conversations with participants. Offering a new way of thinking about demographic engineering (’hard demography’ versus ’soft demography’) and how ethnic groups in conflict deploy demographic strategies, this book will have a broad appeal to demographers, geographers and political scientists.

’At a time of demographic upheaval and soaring migration across ethnic lines, this book is more timely than ever. Paul Morland explains how ethnic groups and the nations they command have shaped their populations to maximise loyalty and minimise difference. Drawing on a range of case studies, he explains how dominant groups control ethnic composition through both identity construction and population policy.’ Eric Kaufmann, Birkbeck College, University of London, UK ’In this ambitious and thought-provoking book, Paul Morland argues for the centrality of strategies of demographic engineering in societies riven by ethnic conflicts. Particularly striking is Morland's distinction between hard engineering which seeks to increase or decrease an ethnic group's numbers and power by encouraging fertility or mortality, or through population movements, and soft engineering which focuses on changing territorial borders or ethnic identities. The result is a penetrating analysis of demographic components of ethnic conflicts in Sri Lanka, Israel/Palestine, Northern Ireland and the United States of America. Cogently argued and lucidly presented, Demographic Engineering makes an original and vital contribution to our understanding of the strategies of ethnic conflict.’ Anthony D. Smith, London School of Economics, UK

Contents: Foreword; Preface; Into the demographic whirlwind; Understanding demographic engineering; Sri Lanka: the forging of a single Sinhalese identity and its consequences; Northern Ireland: the six county state and its population; Israel/Palestine: from ingathering the exiles to competitive breeding; United States of America: defining the territory and ethnically managing its population; Conclusion; Bibliography; Index.