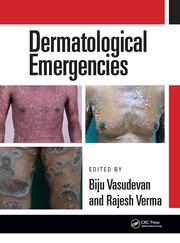 ‘Dermatological Emergencies’ aims to cover aspects of situations and their management when they present in a Dermatology setup. This includes severe drug reactions, bullous disorders, erythroderma, infections, vasculitis and systemic emergencies presenting with skin signs. This book guides the reader to recognize such emergencies, helps to approach the initial phase of management, identifies the investigations, thus leading to a holistic management of the scene. Case scenarios are used in all chapters with logical flow of text, flowcharts, algorithms and representative clinical and laboratory images for better understanding of the readers.

A. Introduction to Dermatological Emergencies

Dr Biju Vasudevan, MD (Dermatology, Venereology and Leprology) from Armed Forces Medical College and FRGUHS (Dermatosurgery) from Bangalore Medical College is presently Professor at Base Hospital Lucknow and is a recognised post-graduate examiner of MUHS, KGMU and West Bengal University. He has 88 indexed publications (14 international), 30 Chapters in various books and is the Editor of the IADVL Colour Atlas of Dermatology, Clinical Correlations in Dermatology and Procedural Dermatosurgery textbooks. He has been a part of 8 research projects, has conducted 24 International/National/ State level quizzes, is on the editorial board of four journals and is presently the Deputy Editor of IJDVL. He has delivered about 76 guest lectures and conducted 8 workshops in various conferences. He has been the Organising/ Scientific secretary of 7 Conferences and has been awarded the young dermatosurgeon award by ACSI in 2017. He has been the past Joint Secretary of IADVL and his interests in dermatology includes vasculitis, connective tissue disorders, skin in systemic medicine and dermatosurgery.

from prestigious Armed Forces Medical College Pune, DNB(Dermatology & Venereology), MNAMS, is presently serving as Professor of Dermatology at Army College of Medical Sciences. He has earlier served as Professor and HOD in Departments of Dermatology at Armed Forces Medical College, Puneand Command Hospital, Lucknow. He was awarded gold medal by Pune University for standing first in MD Dermatology. He is a recognised post graduate teacher and examiner at MUHS, RGUHS, KGMU Lucknow and various other universities. He is passionate about teaching Dermatology to undergraduaes and postgraduates and has been PG guide for many postgraduates. He was awarded "Gaurav Sammaan" by Uttar Bhartiya Sangh, Pune for contribution in field of education in 2013 and "Teacher par Excellence" award by IADVL in 2014. He has been Vice President of IASSTD & AIDS in 2008 and Vice President of IADVL in 2014. He has contributed 20 chapters in various textbooks, published 70 papers, delivered more than 50 invited lectures and has been principal worker in 03 and co-worker in 07 completed research projects. He has organized 07 National level CME programs and conferences in Dermatology. His interests in Dermatology include dermatological emergencies, cutaneous drug reactions, vasculitis and pregnancy dermatoses.

This book provides dermatologists with diagnostic tips for recognizing potentially life-threatening skin diseases and potentially deadly medical conditions that may present with skin findings early in their course, The main strength of the book is that it makes readers aware of true emergencies that can occur with a given dermatologic condition. In the US, it is unusual to find a dermatologist who can manage critically ill patients as well as an intensivist, hospitalist, pulmonologist, or cardiologist. This book provides an overview of what can be needed for such critically ill patients that may present with skin involvement in addition to their multi system disease/failure. 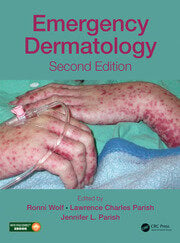