Desire
A History of European Sexuality 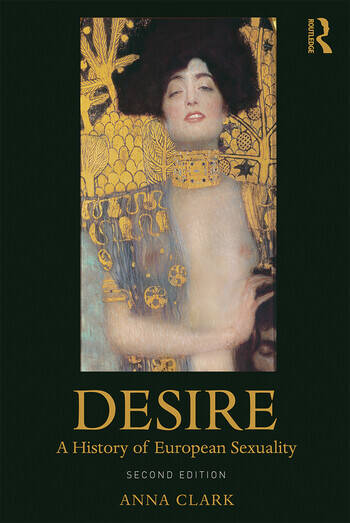 Desire: A History of European Sexuality

A sweeping survey of sexuality in Europe from the Greeks to the present, Desire: A History of European Sexuality follows changing attitudes to two major concepts of sexual desire – desire as dangerous, polluting, and disorderly, and desire as creative, transcendent, even revolutionary – through the major turning points of European history.

Chronological in structure, and wide ranging in scope, Desire addresses such topics as sex in ancient Judaism, Christianity, and Islam, sexual contact and culture clash in Spain and colonial Mesoamerica, new attitudes toward sexuality in the seventeenth and eighteenth centuries, and sex in Bolshevik Russia and Nazi Germany. The book introduces the concept of "twilight moments" to describe activities seen as shameful or dishonorable, but which were tolerated when concealed by shadows, and integrates the history of heterosexuality with same-sex desire, as well as exploring the emotions of love and lust as well as the politics of sex and personal experiences. This new edition has been updated to include a new chapter on sex and imperialism and expanded discussions of Islam and trans issues.

Drawing on a rich array of sources, including poetry, novels, pornography, and film, as well as court records, autobiographies, and personal letters, and written in a lively, engaging style, Desire remains an essential resource for scholars and students of the history of European sexuality, as well as women’s and gender history, social and cultural history and LGBTQ history.

1 Introduction: sexuality and the problem of western civilization 2 Sex and the city: Greece and Rome 3 Divine desire in ancient Judaism, Christianity, and Islam 4 From twilight moments to moral panics: the regulation of sex from the thirteenth to the sixteenth century 5 The age of exploration: sexual contact and culture clash in Spain and colonial Mesoamerica 6 Enlightening desire: new attitudes toward sexuality in the seventeenth and eighteenth centuries 7 In the Victorian twilight: sex out-of-wedlock, sexual commerce, and same-sex desire, 1750–1870 8 Boundaries of the nation, boundaries of the self, 1860–1914 9 Sex and Imperialism 1857-1939 10 Managing desire or consuming sex in interwar culture 11 Sex and the state in the 1930s: Sweden, the Soviet Union, and Nazi Germany 12 The reconstruction of desire and sexual consumerism in postwar Europe Index
...
View More
View Less

Anna Clark is the author of Women’s Silence, Men’s Violence: Sexual Assault in England, 1770–1845 (1987), The Struggle for the Breeches: Gender and the Making of the British Working Class (1995), Scandal: The Sexual Politics of the British Constitution (2003), and Alternative Histories of the Self: A Cultural History of Sexuality and Secrets (2017). She is a professor at the University of Minnesota, USA.