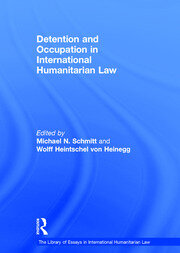 Detention and occupation are two challenging aspects of international humanitarian law in 21st century warfare. The essays selected for this volume examine the historical foundations of these issues, as well as the contemporary practices surrounding them. Detention law was prominently codified in the 1949 Third and Fourth Geneva Conventions, but has been criticized as inadequate in the face of 'new wars' involving non-State actors such as insurgents and terrorists. These essays not only explore historically problematic detention issues like repatriation and the protecting powers regime, but also question whether the extant law suffices to ensure a proper balance between humanitarian considerations and a detaining State's security concerns. Occupation law was originally designed for temporary occupations that maintained the occupied State's institutions pending return of full authority, but has been tested by recent occupations which are often prolonged and which sometimes seek to 'transform' occupied States previously governed by undemocratic and abusive regimes. The essays demonstrate that these are not novel issues and consider how they were handled in the past. They also assess various perspectives as to the purposes and limits of occupation, especially in the face of modern imperatives such as human rights.

Contents: Introduction, Michael N. Schmitt; Part I Detention: The declining significance of POW status, Derek Jinks; Prisoners of war and the protecting power, Howard S. Levie; International law aspects of repatriation of prisoners of war during hostilities, Richard A. Falk; Procedural principles and safeguards for internment/administrative detention in armed conflict and other situations of violence, Jelena Pejic; Evolving Geneva Convention paradigms in the 'war on terrorism': applying the core rules to the release of persons deemed 'unprivileged combatants', Sean D. Murphy. Part II Occupation: The origins of the concept of belligerent occupation, Eyal Benvenisti; Occupation under the laws of war: I, Elbridge Colby; Occupation under the laws of war: II, Elbridge Colby; What is a military occupation?, Adam Roberts; The legal relations between an occupying power and the inhabitants, Lassa Oppenheim; The duty of obedience to the belligerent occupant, Richard R. Baxter; Legislation and maintenance of public order and civil life by occupying powers, Marco SassÃ²li; Government in commission, R.Y. Jennings; Prolonged military occupation: the Israeli-occupied territories since 1967, Adam Roberts; Transformative military occupation: applying the laws of war and human rights, Adam Roberts; Name index.