Deterrence and Crime Prevention
Reconsidering the prospect of sanction 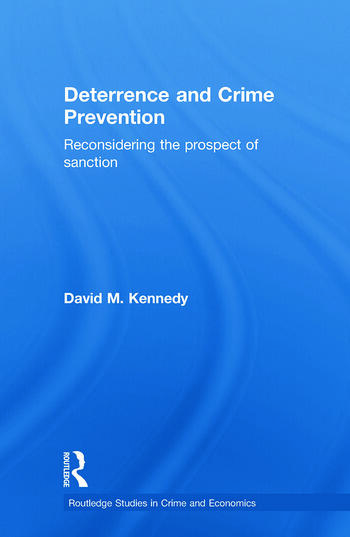 Deterrence and Crime Prevention: Reconsidering the prospect of sanction

Deterrence is at the heart of the preventive aspiration of criminal justice.  Deterrence, whether through preventive patrol by police officers or stiff prison sentences for violent offenders, is the principal mechanism through which the central feature of criminal justice, the exercise of state authority, works – it is hoped -- to diminish offending and enhance public safety.  And however well we think deterrence works, it clearly often does not work nearly as well as we would like – and often at very great cost.

Drawing on a wide range of scholarly literatures and real-world experience, Kennedy argues that we should reframe the ways in which we think about and produce deterrence.  He argues that many of the ways in which we seek to deter crime in fact facilitate offending; that simple steps such as providing clear information to offenders could transform deterrence; that communities may be far more effective than legal authorities in deterring crime; that apparently minor sanctions can deter more effectively than draconian ones; that groups, rather than individual offenders, should often be the focus of deterrence; that existing legal tools can be used in unusual but greatly more effective ways; that even serious offenders can be reached through deliberate moral engagement; and that authorities, communities, and offenders – no matter how divided – share and can occupy hidden common ground.

The result is a sophisticated but ultimately common-sense and profoundly hopeful case that we can and should use new deterrence strategies to address some of our most important crime problems.  Drawing on and expanding on the lessons of groundbreaking real-world work like Boston’s Operation Ceasefire – credited with the "Boston Miracle" of the 1990s – "Deterrence and Crime Prevention" is required reading for scholars, law enforcement practitioners, and all with an interest in public safety and the health of communities.

David M. Kennedy is the director of the Center for Crime Prevention and Control at John Jay College of Criminal Justice in New York City.

"Deterrence – or the threat of sanctions for violation of rules – is a complex concept but an inherent part of any crime-control strategy. David Kennedy has thought long and hard about the complexities and has worked directly with law enforcement and communities in developing innovative deterrent strategies and tactics. In this wide-ranging exploration of the many facets of deterrence, Kennedy draws heavily on his involvement with real-world crime prevention to develop new frameworks to make sure that deterrent threats are framed to do the job."

"David Kennedy demonstrates an encyclopedic command of the deterrence literature. More important is his balanced and insightful analysis of the promise and limits of deterrence for preventing crime. This book is a must read for students of deterrence and practitioners who can affect the way the punitive powers of the police, courts, and corrections are used to prevent crime."

"By the thoughtful application of focused deterrence strategies our community has become a safer place. Our neighborhoods have been freed from the terror of violence associated with overt drug markets. The teamwork that took place between the police and our citizens to make this happen has actually been healing to the relationship between the police and our African-American citizens in particular. We should never again have to admit that we cannot work together successfully due to the baggage of misunderstanding. The ability to produce sustained reductions in violent crime in our most troubled neighborhoods has been achieved. We now enjoy the ability to effectively combat violent crime in a manner that does not produce unintended harm to our relationships within the very community that needs our help so desperately. This book chronicles the path, from the theories to particle application, to achieving long awaited success in this arena. My sincere gratitude goes to David Kennedy for showing us the way."

"Practitioners, policy makers, and scholars should make room for "Deterrence and Crime Prevention" on their special bookshelf reserved for often-used guides to their thinking and practice. This fresh look at deterrence is theoretically sound and empirically based. Most importantly, it heavily relies on Mr. Kennedy's "on the ground" pathbreaking work in violence prevention and drug market control. My prepublication copy is dogged-eared already.

"The book succeeds brilliantly at two levels: it reformulates deterrence theory for criminologists and, for law enforcement, it shows how focused partnerships with communities and other agencies can reduce even very serious crime."

"Academic books tend to be written for other academics - this is an exception. It rightly challenges many of our assumptions about the fundamentals on which policing is based. It goes on to suggest some powerful ways in which we can rethink our approaches to the most intractable problems facing policing today - drugs, gangs, guns and violence. I thoroughly commend it to colleagues across the world."

"David Kennedy’s wise book is a must-read for all policy-makers, practitioners and researchers working in criminal justice. It contains the most imaginative, informed and wide-ranging discussion of deterrence as a means of crime control that is yet to appear. The argument is highly accessible and reflects not only Kennedy’s fine scholarship but also his wide experience in working with the police and their partners to develop and implement effective crime control strategies.

"It is perhaps once in a generation that a book is published that changes the way we think about a major area of public policy. This is one such book. It is both readable and scholarly; theoretical and practical. It is the only academic book I have ever read that I would describe as a page turner. It will be on the ‘must read’ list of crime scholars for years to come.

"After years on the periphery of crime policy, "deterrence" can now take center stage.  David Kennedy’s new book, inspired by his path-breaking work to reduce gang violence in Boston and close drug markets in High Point, North Carolina, illuminates the breadth and power of deterrence as a crime prevention tool.  His discussion of the benefits of direct communication with likely reoffenders, the effectiveness of informal sanctions (such as family disapproval), and the ways in which enforcement can unintentionally undermine deterrence should interest any practitioner who seeks to prevent crime, and not simply react to it. Kennedy’s work has the potential to reframe our discussion, and ractice, of crime control policy.