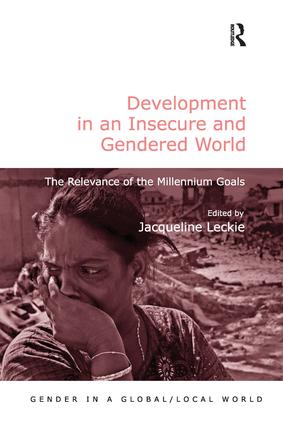 Development in an Insecure and Gendered World

The Relevance of the Millennium Goals, 1st Edition

The Millennium Declaration was adopted by the United Nations General Assembly in 2000 and explicit targets were set to eradicate key problems in human development by 2015. This collection focuses specifically on the goals relating to gender issues that are problematic for women. The most relevant and contentious is that of promoting gender equality and empowering women. The book provides an overview of this and investigates literature that considers how gender is central to achieving the other goals. The contributors distinctively consider gender in the context of human security (or insecurity); the reduction and elimination of conflict would seem to be central to achieving targets. One of the major themes of this collection is whether gender insecurity has been exacerbated in an increasingly insecure world. The book considers not only military and civilian conflict in the contemporary era but also security in the broader sense of human development, such as environmental, reproductive and economic security.

'…offers a timely consideration of gender-blind strategies that warp the achievement of the 2015 UN Millennium Development Goals, focusing on key concepts like mainstreaming and critical security studies as well as on the under-researched Asia-Pacific region…this book is a "must read" for those interested in disaster relief and the supposed distinctions between humanitarian and development assistance.' Kathleen Staudt, University of Texas at El Paso, USA '… extends the meanings of human security beyond the normative framework and reveals a sensitive account of its experiential dimensions. In a world order structured by many hierarchies, theorizing about human security can benefit from an approach sensitive to geo-political context and local realities. The book offers valuable insights which can help bridge security studies with gender studies.' Thanh-Dam Truong, Erasmus University of Rotterdam, The Netherlands

Gender in a Global/Local World critically explores the uneven and often contradictory ways in which global processes and local identities come together. Much has been and is being written about globalization and responses to it but rarely from a critical, historical, gendered perspective. Yet, these processes are profoundly gendered albeit in different ways in particular contexts and times. The changes in social, cultural, economic and political institutions and practices alter the conditions under which women and men make and remake their lives. New spaces have been created - economic, political, social - and previously silent voices are being heard. North-South dichotomies are being undermined as increasing numbers of people and communities are exposed to international processes through migration, travel, and communication, even as marginalization and poverty intensify for many in all parts of the world. The series features monographs and collections which explore the tensions in a ’global/local world’, and includes contributions from all disciplines in recognition that no single approach can capture these complex processes.

Please contact one of the editors if you have a proposal for consideration: