Dialectic
The Pulse of Freedom 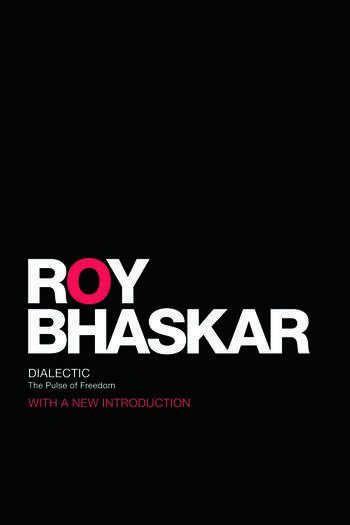 Dialectic: The Pulse of Freedom

Dialectic is now widely regarded as a classic of contemporary philosophy. This book, first published in 1993, sets itself three main aims: the development of a general theory of dialectic, of which Hegelian dialectic can be seen to be a special case; the dialectical enrichment and deepening of critical realism, viz. into the system of dialectical critical realism; and the outline of the elements of a totalizing critique of Western philosophy.

The first chapter clarifies the rational core of Hegelian dialectic. Chapter two then proceeds to develop a general theory of dialectic. Isolating the fallacy of 'ontological monovalence', Roy Bhaskar then shows how absence and other negating concepts such as contradiction have a legitimate and necessary ontological employment. He then goes on to give a synoptic account of key dialectical concepts such as the concrete universal; to sketch the further dialectical development of critical naturalism through an account of what he calls four-planar social being; and following consideration of the dialectical critique of analytical reason, he moves on to the real definition of dialectic as absenting absence and in the human sphere, the axiology of freedom.

Chapter three extends and deepens critical realism’s characteristic concerns with ontology, science, social science and emancipation not only into the realms of negativity and totality, but also into the fields of reference and truth, spatio-temporality, tense and process, the logic of dialectical universalizability and on to the plane of ethics, where it articulates a combination of moral realism and ethical naturalism, whereby consideration of elemental desire involves commitment to the eudaimonistic society. This is then followed by a sublime discussion of key moments in the trajectory of Western philosophy, the tradition of which can now be seen to be based on what the author calls the unholy trinity of the epistemic fallacy or the reduction of being to knowledge, primal squeeze or the collapse of structure and alethic truth, and ontological monovalence.

'...stunning readings of key chapters in the history of philosophy. This is a unique book full of gems.' – Peter Manicas

'In this stunning book, Roy Bhaskar develops his own programme of critical realism into a radically new and original theory of dialectics and a critique of previous theories from the ancient Greeks to twentieth century neo-Marxism. The result is comparable in its scope and ambition to Sartre’s critique of dialectical reasoning. It is hard to think of any other contemporary philosopher with the powers to bring this off.' – William Outhwaite