Difficult Heritage
Negotiating the Nazi Past in Nuremberg and Beyond 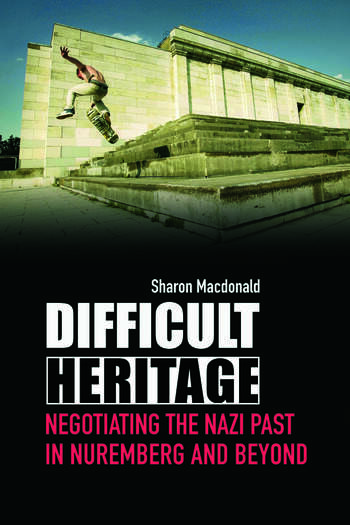 Difficult Heritage: Negotiating the Nazi Past in Nuremberg and Beyond

How does a city and a nation deal with a legacy of perpetrating atrocity? How are contemporary identities negotiated and shaped in the face of concrete reminders of a past that most wish they did not have?

Difficult Heritage focuses on the case of Nuremberg – a city whose name is indelibly linked with Nazism – to explore these questions and their implications. Using an original in-depth research, using archival, interview and ethnographic sources, it provides not only fascinating new material and perspectives, but also more general original theorizing of the relationship between heritage, identity and material culture.

The book looks at how Nuremberg has dealt with its Nazi past post-1945. It focuses especially, but not exclusively, on the city’s architectural heritage, in particular, the former Nazi party rally grounds, on which the Nuremburg rallies were staged. The book draws on original sources, such as city council debates and interviews, to chart a lively picture of debate, action and inaction in relation to this site and significant others, in Nuremberg and elsewhere. In doing so, Difficult Heritage seeks to highlight changes over time in the ways in which the Nazi past has been dealt with in Germany, and the underlying cultural assumptions, motivations and sources of friction involved.

Whilst referencing wider debates and giving examples of what was happening elsewhere in Germany and beyond, Difficult Heritage provides a rich in-depth account of this most fascinating of cases. It also engages in comparative reflection on developments underway elsewhere in order to contextualize what was happening in Nuremberg and to show similarities to and differences from the ways in which other ‘difficult heritages’ have been dealt with elsewhere. By doing so, the author offers an informed perspective on ways of dealing with difficult heritage, today and in the future, discussing innovative museological, educational and artistic practice.

"Sharon Macdonald deftly handles this complex terrain, offering a sophisticated theoretical analysis based on a well-grounded ethnographic study. In other words, this book is an exceptional piece of anthropology."
-Chip Colwell-Chanthaphonh, Denver Museum of Nature and Science, Current Anthropology, Volume 51, Number 3, June 2010