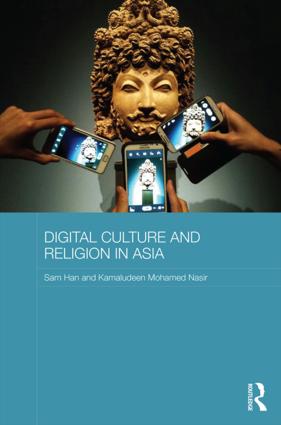 Digital Culture and Religion in Asia

This book critically analyses the functions and interconnectedness between religion and digital media in a range of East Asian countries. It discusses both how religious organizations make use of new technologies, and also explores how new technologies are reshaping religion in novel and interesting ways. Based on extensive research, the book focuses in particular on Christianity in South Korea, Neo-Shintoism in Japan, Falun Gong in China and Islam in Southeast Asia. Offering a comparative perspective on a broad range of media practices including video gaming, virtual worship, social networking and online testimonials, the book also investigates the idea that use of technology in itself mirrors religious practices. With an analysis of the impact of religion and new technology on national consciousness in a range of geographical locations, the authors offer a broadening of the scope of the study of religion, culture and media.

"Given that digital and religion are two pillars of modern culture in Asia, this is a timely exploration into a relationship that has not previously been covered in such detail…Han and Nasir provide an insightful look into the cultural impact of digitalisation and the complex and interconnected direction of modern religion." - Jan Wisniewski, Communication Director magazine, asia-pacific issue, Number 4/2015, p. 93

"The interdisciplinary approach in expanding on the historical, social, political and economic background provides valuable information for the reader in understanding the context of each case study. The choice of case studies are in line with the current discourse trends on religion and digital culture." - Denzil Chetty, University of South Africa, Journal for the Study of Religion

"Sam Han and Kamaludeen Mohamed Nasir have done an excellent job in interrogating the role of the Internet in bringing different faith communities together, connecting so many others who can find peace which major faith traditions bring to our lives." - Subhasis Chattopadhyay, Narasinha Dutt College, Howrah, Prabuddha Bharata

Introduction: Understanding Digital Culture and Religion in/of Asia 1. Digital Christianity in Korea: Practical Affects and Additive Religion 2. Religion as moral infrastructure: The practice of neo-Shintoism in Japan 3. Religion as propaganda: The Falun Gong’s Info-War 4. New Media Islam in Southeast Asia 5. Hyper-Real Religions in Asia: Beyond popular culture and popular religion 6. Religion for Millennials: The Prospect of Religious Life and Identity in the New Asian Century 7. In lieu of a conclusion

Sam Han is Assistant Professor of Sociology at Nanyang Technological University (NTU) in Singapore and Adjunct Research Fellow at the Hawke Research Institute of the University of South Australia.

Much work on contemporary religion in Asia considers the subject from the perspective of the great religions, often focusing on the development of official beliefs, and the development of formal institutions.  The books in this series, on the other hand, examine the actual practice of religion in everyday life in modern Asian societies.  They reveal a very rich picture of varying religious practices, many of them new and non-traditional.  The religions of Asia are undergoing much radical change not only communal religious revivalism, but also an explosion of urban piety, popular preaching, charismatic churches, and on-line religion.  The books cover a wide range of subjects in the countries of East, Southeast, South and Central Asia.  The series welcomes innovative approaches to theory and methods in the study of religion and religions, and work which considers religion in relation to culture, politics, ethnicity or gender.

Bryan S. Turner has had a long and distinguished career as a leading scholar of religion, having worked previously in various universities in Singapore, The Netherlands, Germany and the United States. He is Emeritus Professor of Sociology at the Graduate Center CUNY USA, and is currently Professor of Sociology at the Australian Catholic University, Honorary Professor at Potsdam University Germany, and Honorary Fellow at the Edward Cadbury Centre for the Public Understanding of Religion, University of Birmingham, UK.