Dire Emotions and Lethal Behaviours
Eclipse of the Life Instinct 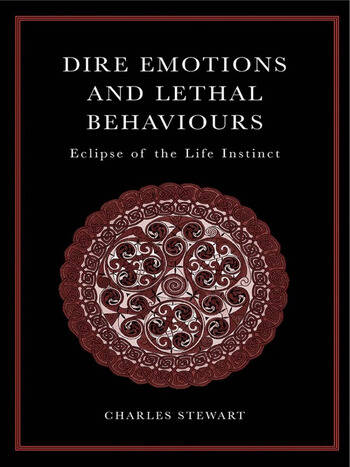 Dire Emotions and Lethal Behaviours: Eclipse of the Life Instinct

Dire Emotions and Lethal Behaviours explores the primary motivational system in human beings. Based on the work of C. G. Jung, James Hillman, Louis Stewart and Silvan Tomkins, Charles Stewart investigates the psychology of the innate affects, with a focus towards the emotional motivation of adolescents and young adults who have killed others, themselves, or both.

It is suggested that social isolation, dissociation of the personality, unbearable emotions, and possession by affects are necessary conditions for both homicide and suicide. Stewart argues that these conditions result from deep-seated emotional psychopathology which involves both the positive affects of the life instinct - Interest and Joy, and the crisis affects  - Fear, Anguish, Anger, and Shame/Contempt.

Illustrated throughout with case studies of individuals who have committed homicide, suicide, or both, Dire Emotions and Lethal Behaviours aims to discover the emotional motivations for such behaviours so that through education and psychological treatment, such tragic outcomes can be prevented. This book will be of interest to professionals and students in the fields of mental health and criminal justice.

Charles T. Stewart is a Child Psychiatrist in private practice in Berkeley, California. He has spent 25 years working in community mental health where he directed programs, treated patients, and taught psychotherapy to trainees.

"Charles Stewart's Dire Emotions and Lethal Behaviours offers a penetrating study of the emotional lives of adolescents and young adults who commit murder and suicide (and often both). Stewart writes in a compelling way about the horror and the tragedy of humanity turned against itself... this book not only attempts to confront, from a psychoanalytic perspective, the most desperate and brutal aspects of these adolescents and young adults it also asks us to consider what we can do with such understandings to prevent future acts of brutality. This book will be of great interest to anyone - within or outside of the mental health professions - who feels a need to understand the violence of our time." - Thomas H. Ogden, author of This Art of Psychoanalysis

'Charles Stewart's... ideas about innate affects are very close to the ways in which we experience life – through the emotions... his detailed explanations of how the crisis affects of fear, anguish, anger and shame/contempt weave together to create the behaviours the world has to come both to expect and to dread, is an exemplary demonstration of public psychology in action. This profoundly useful book will appeal to the clinical professions, to educators, and to the general reader.' - Andrew Samuels, University of Essex, UK

'Throughout Charles Stewart’s Dire Emotions and Lethal Behaviours we bear witness to the paramount importance of emotion in human relationships and human development. As we venture with Stewart through the creative and destructive power of the unconscious, and follow his call for emotional perceptiveness, responsiveness, and authenticity, we hear the reverberations of Freud, Klein, Winnicott, and Bion. In re-sounding these rich, compelling, and oft times competing psychoanalytic voices, Charles Stewart brings about an integrated and living theory of affect.' - Jeanne C. Harasemovitch, San Francisco Center for Psychoanalysis, USA

'Charles T. Stewart has written in Dire Emotions and Lethal Behaviours a compelling study about the sources of violence among teenagers and young adults... an excellent, well researched book for clinicians, teachers, and anyone working with adolescents and young adults.' - Robert Tyminski, Jungian analyst in San Francisco and Clinical Professor of Psychiatry at the University of California in San Francisco, USA

"This book is well worth reading; mainly because of [Stewart's] ability to bring together notions that were until now unconnected... this book is a big step forward in promoting Jungian archetypes, affect theories and treatment techniques in the treatment of horrific violent acts and their perpetrators." - Prof. Dr. phil. Rainer Krause, Director of Psychology, University of Saarland, Germany

"The book is sensitive and compelling in describing the tragedy of humankind turned against itself and is helpful in attempting to understand the apparent increase in violence in contemporary society." - Marilyn Newman Metzl in PsycCRITIQUES