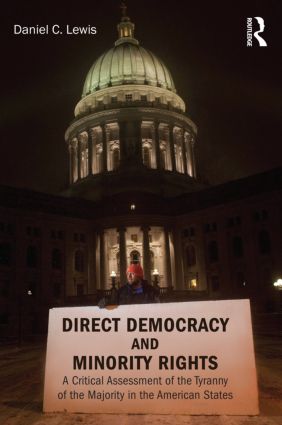 A Critical Assessment of the Tyranny of the Majority in the American States, 1st Edition

This book conclusively demonstrates that direct democracy—institutions like the ballot initiative and the referendum—endangers the rights of minorities and perpetuates a tyranny of the majority. While advocates of direct democracy advocate that these institutions protect citizens from corrupt lawmakers beholden to special interests, Daniel Lewis’s thorough investigation shows how such mass participation exposes minority groups to negative policy outcomes favored by only a slim majority of voters. Some would argue that greater democratic responsiveness is a positive outcome, but without the checks and balances of a representative, separated powers system that encourages deliberation and minority representation, minority rights are at increased risk under direct democracy institutions.

While research has been presented that supports both sides of the debate, the existing literature has yet to produce consistent and compelling evidence in favor of one side or the other. This book undertakes a comprehensive examination of the "tyranny of the majority" critique of direct democracy by examining a host of contemporary American state policies that affect the rights of a variety of minority groups. By assessing the impact of direct democracy on both ballot measures and traditional legislation, the book provides a more complete picture of how citizen legislative institutions can affect minority rights, covering a myriad of contemporary (and sometimes controversial) minority rights issues, including same-sex marriage, affirmative action, official English, hate crimes laws, racial profiling, and anti-discrimination laws.

The book is unique in its approach and scope, making it compelling for scholars interested in direct democracy, state politics, minority politics and electoral institutions, as well as American politics generally.

"Examining a range of controversial public policies in the American states, Daniel Lewis' exceptionally accessible book takes on the thorny question of whether ballot measures undermine the rights of minorities. His empirical findings, which should be of interest scholars and practitioners alike, suggest that when rights are contingent on majority preferences, minorities are indeed at risk."

—Daniel A. Smith, University of Florida

"This study makes a careful and multi-faceted empirical investigation into the important question of whether direct democracy threatens the rights of political minorities. Focusing on some of the most significant minority-rights issues of the day, Lewis uncovers a complex dynamic in which political institutions and public opinion interact to shape how states choose to protect (and not protect) their political minorities. This study provides the most nuanced understanding to date of this timely political issue."

"Lewis’ analysis is careful, nuanced, and compelling. He presents the strongest evidence to date that the citizen initiative undermines representative democracy and endangers the rights of political minorities."

Controversies in Electoral Democracy and Representation

The Routledge series Controversies in Electoral Democracy and Representation presents cutting edge scholarship and innovative thinking on a broad range of issues relating to democratic practice and theory. An electoral democracy, to be effective, must show a strong relationship between representation and a fair open election process. Designed to foster debate and challenge assumptions about how elections and democratic representation should work, titles in the series present a strong but fair argument on topics related to elections and the institutions shaping them, voting behavior, party and media involvement, representation, and democratic theory.