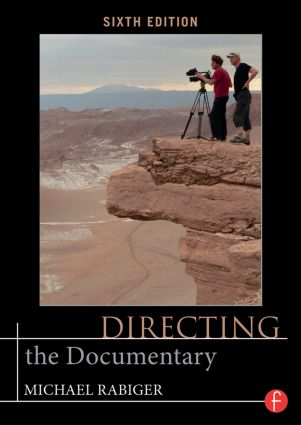 Directing the Documentary, Sixth Edition is the definitive book on the form, offering time-tested principles to help you master the craft. Ideal for documentary courses as well as aspiring and established documentary filmmakers, this book has it all, with in-depth lessons and insider perspectives on every aspect of preproduction, production, and postproduction. Focusing on the hands-on work needed to make your concept a reality, this new edition covers it all, from the fundamental to advanced elements of directing and more. It includes dozens of projects, practical exercises, and thought-provoking questions, and provides best practices for researching and honing your documentary idea, developing a crew, guiding your team, maintaining control throughout the shoot, and much more.

In Directing the Documentary, Sixth Edition Michael Rabiger combines expert advice on the storytelling process and technical aspects of documentary filmmaking with sound commentary on the philosophical underpinnings of the art, providing the practical and holistic understanding you need to become a highly-regarded, original, and ethical contributor to the genre.

"The USC documentary faculty has required this excellent book in all our documentary courses since its 1st edition. Rabiger has added to his in-depth analysis of the creative and practical implications of documentary production in this latest edition, with new sections on grant writing, technology, and case studies. The book is essential for students and it’s also one that every professional documentary filmmaker can constantly refer to and be inspired by."

"This book is a time-proof classic, a one-of-a kind roadmap to reaching excellence in documentary making that reads like good, inspiring literature. I have collected and read all of its editions avidly, and can already see that this new edition will serve as an invaluable companion for any documentary filmmaker."

Michael Rabiger began in the cutting rooms of England’s Pinewood and Shepperton Studios, became an editor and BBC director of documentaries, and then specialized for many years in the US as a production and aesthetics educator. At Columbia College Chicago he was co-founder then chair of the Film/Video Department, and founded the Michael Rabiger Center for Documentary. He has directed or edited more than 35 films, given workshops in many countries, and led a multinational European workshop for CILECT. Additionally, he won the International Documentary Association's Scholarship and Preservation Award, served as a Fulbright Specialist in South Africa, and is an honorary professor at the University of Buenos Aires.