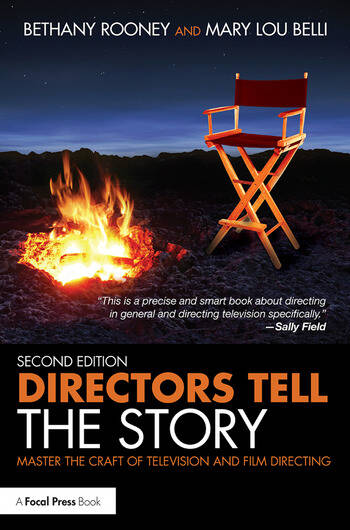 Directors Tell the Story: Master the Craft of Television and Film Directing

Here, in one volume, learn everything you need to know to become an excellent director, not merely a good one. Covering everything through prep, shoot, and post, the authors offer practical instruction on how to craft a creative vision, translate a script into a visual story, establish and maintain the look and feel of a television show or film, lead the cast and crew, keep a complex operation running on time and on budget, and effectively oversee editing and post-production. Directors Tell the Story provides behind-the-scenes access to the secrets of successful directors, as well as exercises that use original scripted material.

has directed over two hundred episodes of prime-time network shows, including NCIS, The Originals, Nashville, NCIS New Orleans, and Criminal Minds. She teaches the Warner Brothers Directing Workshop and serves on numerous committees at the Directors Guild of America.

is a two-time Emmy Award winning producer, writer, and director as well as the author of two books. She directed NCIS New Orleans, Monk, Hart of Dixie, The Game, Girlfriends, and The Wizards of Waverly Place. She teaches directing at USC’s School of Cinematic Arts.

1. Breaking Down the Script for Story

2. Breaking Down the Script for Character

6. Organizing the Shoot with the First Assistant Director

8. Blocking and Shot Listing, Part One

14. Working with the Editor

IV. Being a Director

17. The Demands of the Job…xxx

"The success of the directors coming out of the Warner Bros. Directors' Workshop has been undeniable. A huge reason for that is because we use this book as its main teaching tool. In my opinion, if you are serious about being a television director, buying this book should be the first thing you do." —Christopher Mack, Vice President, Warner Bros. Television Workshop

"Directing is an amazing and daunting combination of Art and Craft. To become a complete Director requires a total blend of instinct, experience and education. The information, tips and advice these two fine Directors have collected in their books are invaluable and presented in a way that allows the reader to not only understand what is offered, but to use it effectively." —Michael Zinberg, Director

"This is one of the most specific and detailed books about directing television I’ve ever read. As experts in directing both comedy and drama, and hundreds of television shows between them, the authors have deftly translated their years of practical knowledge and acquired skills to the page, giving insightful instructions that will benefit a television director on any level." —Jennifer Warren, Associate Professor of Practice and Chair of Directing Track, School of Cinematic Arts, USC, Chair of Board of Alliance of Women Directors

"As a new director, you are constantly feeling like you want a refresher course on things you've previously learned. The thing I love about Bethany and Mary Lou's book is that it's so accessible. It's packed with so many jewels that you employ throughout every stage of the director's process. I keep the book nearby whenever I'm starting a new project. From an actor's perspective, chapter 10 is invaluable. I wish it was mandatory for every director to read that chapter before their first day on the set." —Regina King, Actress, Director

"Bethany Rooney and Mary Lou Belli’s Directors Tell the Story: Master the Craft of Television and Film Directing... [is] one of the handful of essential volumes written by working directors. Between them, Rooney and Belli have helmed hundreds of hours of episodic television (ranging from episodes of The Wonder Years and Ally McBeal for Rooney, to Sister, Sister and Monk for Belli), as well as several made-for-TV features. This experience permeates every page of their book...The result is a vital addition to any moviemaker’s library." - Jim Hemphill, Moviemaker.com