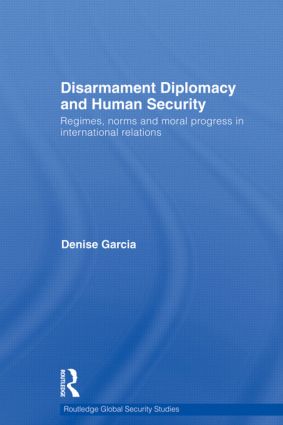 This book assesses how progress in disarmament diplomacy in the last decade has improved human security.

In doing so, the book looks at three cases of the development of international norms in this arena. First, it traces how new international normative understandings have shaped the evolution of and support for an Arms Trade Treaty (the supply side of the arms trade); and, second, it examines the small arms international regime and examines a multilateral initiative that aims to address the demand side (by the Geneva Declaration); and, third, it examines the evolution of two processes to ban and regulate cluster munitions.

The formation of international norms in these areas is a remarkable development, as it means that a domain that was previously thought to be the exclusive purview of states, i.e. how they procure and manage arms, has been penetrated by multiple influences from worldwide civil society. As a result, norms and treaties are being established to address the domain of arms, and states will have more multilateral restriction over their arms and less sovereignty in this domain.

Denise Garcia is Assistant Professor in the Department of Political Science at Northeastern University, Boston. She is author of Small Arms and Security (Routledge 2006).

Denise Garcia is Assistant Professor in the Department of Political Science at Northeastern University, Boston. She is author of Small Arms and Security (Routledge 2006).