Discordant Comrades
Identities and Loyalties on the South African Left 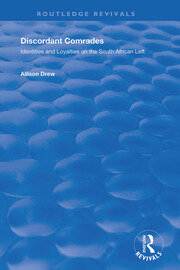 Discordant Comrades: Identities and Loyalties on the South African Left

This title was first published in 2000:  This book considers the fortunes of socialism in South Africa from the doctrine’s arrival around 1900 to its legal suppression in 1950. Socialism’s universal claims had to come to terms with South Africa’s singular national experience in which a racial ideology and a racial division of the working class played a far greater role than in any other country. The left in South Africa had to deal with all the complexities of ideology and strategy that faced their counterparts in Europe and North America; but in South Africa it was further vexed by challenges of profound racial and national inequalities and a white labour movement which sought protection through racial segregation. Communism, rather than Social Democracy, prevailed; hence the reverberations of the splits in the Communist International were far more debilitating in South Africa than anywhere else. In the years after World War II African nationalism became the dominant influence on the South African left, chiefly through the relationship between the ANC and the Communist Party. Discordant Comrades draws on a wide range of primary sources from inside and outside South Africa, including the archives of the Communist International in Moscow. The result is a scholarly and challenging analysis of the South African left.

Introduction; writing South African socialist history; The international and national origins of South African socialism; ’Rather a strange gospel’: socialism in South Africa, 1900--1917; ’The Word was made flesh’: the impact of the Russian Revolution on South Africa; Searching for the socialist road: the Rand Revolt and the turn to black labour; The one best way: the Comintern’s hand and the Native Republic thesis; The New Line: fighting the scourge of Buntingism; A new prophet, a new prophecy: the origins of South African Trotskyism; Inquisition and recantation; Illusory visions: black unity and left unity in the 1930s; ’Wars and rumours of wars’: socialists confront the Second World War; ’Not in word, but in power’: socialists and black protest during the war; ’Peace; and there was no peace’: the Cold War and the suppression of socialism; Conclusion: the burden of history and the burden of choice.

'The record of resistance to the white supremacist regime in South Africa is currently being explored in the light of liberation. Discordant Comrades is concerned with the part played by professed socialists during the long dark. It is an important book which adds much to our knowledge. Allison Drew’s meticulous research has reached into the Moscow archives of the Comintern; and given the rate at which South Africa’s veteran socialists are vanishing, her interviews with survivors are correspondingly valuable.' The Times Literary Supplement ’Drew ... has produced the best study to date - a scholarly, critical analysis that examines in detail the tragic-comical, theoretical gyrations, splits, and internal bickering of the CPSA from its beginnings to its legal suppression in 1950.’ Choice '... makes an important addition to the history of left politics in South Africa... it will be essential reading, as much for serious students of the Communist International as for South African historians... this book makes a significant contribution to our knowledge of the South African left.' H-Net Reviews 'This rich book makes a unique contribution to our understanding of ties between the Comintern and its satellite parties as well as the early history of the South African antiapartheid movement.' American Political Science Review 'Allison Drew offers a detailed, absorbingly vivid account of the development of "the Left" in South Africa over the first half of the last century, providing us a valuable resource... Her study is meticulously researched with the added value of being...the first comprehensive published account to draw on the Comintern archives.... a richly documented, detailed and comprehensive contribution to the exploration of the history of the left in South Africa.' International Review of Social History 'Discordant Comrades (...) is a pathbreaking work... It draws on a far wider range of archival materials - including the archives of the Cominter