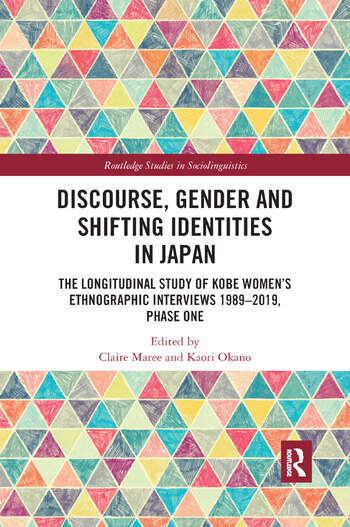 This book is the first in a unique series drawn from an interdisciplinary, longitudinal project entitled ‘Thirty Years of Talk.’ For 30 years, Okano recorded ethnographic interviews and collected data on the language of working class women in Kobe, Japan. This long-range study sketches the transitions in these women's lives and how their language use, discourse and identities change in specific sociocultural contexts as they shift through different stages of their personal and public lives. It is a ground-breaking, ‘real time’ panel study that follows the same individuals and observes the same phenomena at regular intervals over three decades. In this volume the authors examine the changes in the speech of one particular woman, Kanako, as her social identity shifts from high-school girl to mother and fisherman’s wife, and as her relationship with the interviewer develops. They identify changes in linguistic strategies as she negotiates gender/sexuality norms, stylistic features related to the construction of rapport, the use of discourse markers as she gets older, and the interviewer’s information-seeking strategies.

is Professor in Asian Studies/Japanese at La Trobe University. She researches in the field of the sociology and anthropology of inequality and education in Japan and East Asia, including multiculturalism, indigenous education, ethnography of growing up, and local activism (e.g., NPOs and NGOs). Her key publications include Rethinking Japanese Studies (with Sugimoto, Y., 2017), Nonformal Education and Civil Society in Japan (2016, Routledge), Minorities and Education in Multicultural Japan (co-ed. 2011, Routledge),) Young Women in Japan: Transitions to Adulthood (2009), Education in Contemporary Japan (with M. Tsuchiya, CUP, 1999) and School to Work Transition in Japan (1993).