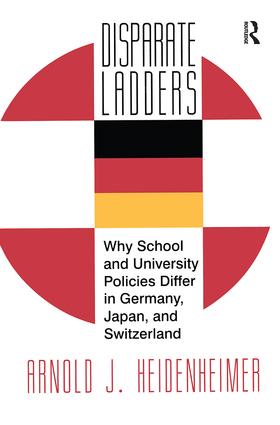 Why School and University Policies Differ in Germany, Japan and Switzerland, 1st Edition

This study breaks new ground in examining how political factors helped lead three countries with highly regarded education systems to evolve quite different structures and processes in their secondary and higher education sectors. Their educational "ladders" are disparate because the techniques and timing for selecting students for further educational opportunities vary both among the three nations, and within the German and Swiss federal systems. The comparative analysis seeks to place the Japanese trajectory with reference to European developments, and to account for some of its unique aspects. Building on an extensive record of publication on comparative education policies and welfare state development, Heidenheimer places special emphasis on exploring the network of relationships between the various levels of the educational system and tiers of government.Following a strategy of integrated comparative analysis, the various national school and university types are directly compared as to their permeability, nature of administrative supervision, curricula, and examination practices. Contrasting the ways in which political parties and bureaucracies have made and adapted policies helps clarify how and why specific innovations became political issues, at the national and regional levels. Through close contextual case analysis, the study probes why, despite great differences hi political institutions, some secondary school policies became especially embattled in all three countries.Heidenheimer explains why the German Lander have maintained a monopoly in the university sector, whereas in both "centralized" Japan and "decentralized" Switzerland national governments operate and finance key parts of the university sector. Also analyzed is the impact of post-unification developments on East German university expansion. Whereas many Swiss schools have no principal, German courts have ruled that principals have tenure in their jobs. This comparative treatment by a political scientist complements studies of education by sociologists and economists analyzing how differences in political institutions have helped shape some distinctive policy emphases. Based on original research and a broad command of the literature, Disparate Ladders will appeal to school administrators, educators, political scientists, social historians, sociologists, and multiculturalists.