Disruption in the Audit Market
The Future of the Big Four 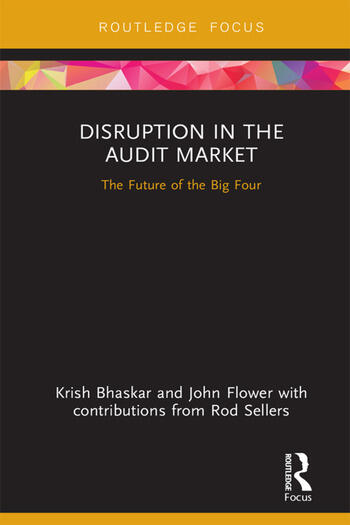 Disruption in the Audit Market: The Future of the Big Four

Focussing on the dominance of the Big Four auditing firms – PwC, EY, Deloitte and KPMG – this concise volume provides an authoritative critical assessment of the state and future of the audit market, currently the subject of much debate and the focus of significant government enquiries. Drawing on extensive research and a vast collection of evidence from interviews with insiders, experts and users, it explores the key issues of audit quality, independence, choice and the growing expectation gap.

Just as disruptive technologies are overturning other established sectors, this book explores their impact on accounting, financial reporting and auditing. It questions whether the Big Four-dominated audit market is prepared not only for the inevitable disruption of new technologies, but also the challenges of negative public perceptions, cynicism about regulation and demands for greater transparency.

In the context of increasing high-profile corporate failures, this book provides a compelling scrutiny of the industry’s failings and present difficulties, and the impact of future disruption. At this crucial time, it will be of great interest to students, researchers and professionals in accounting and auditing, as well as policy makers and regulators.

Krish Bhaskar was founding Professor of Accounting at the University of East Anglia, UK and previously held positions at the London School of Economics and the University of Bristol. He is the author of over 50 books and has also worked extensively in the IT, consulting, investment banking, automotive and forecasting sectors.

John Flower, now retired, was formerly Professor of Accounting at the University of Bristol and Director of the Centre for Research in European Accounting, Brussels.

"Bringing about improvements in the audit market is one of the most important financial challenges of the age. This book examines various possible ways of fostering improvement. It is informative and stimulating. Krish Bhaskar and John Flower, together with Rod Sellers, have a wide range of experience in auditing, management and academia and this shows in their balanced analysis. I recommend the book.", Sir Bryan Carsberg has held numerous senior academic posts in accounting, and policy roles including Director General of Oftel, Director General of Fair Trading and was Secretary General of the International Accounting Standards Committee, 1995–2001.

"In the I990s I was asked by the Institute of Chartered Accountants of England and Wales (ICAEW) to help celebrate the 500th anniversary of the publication of Luca Pacioli's 'De Summa'. The Institute was keen to mark this significant anniversary of the key work in the development of accountancy and build the image of the profession in Europe and with the European institutions. My contacts with the ICAEW introduced me to the professional world of the accountant and broke my preconception that this was a domain of stuffy bookkeepers. Here was a world of financial magicians with integrity. Some 25 years later, many traditional viewpoints are under searching examination and Professor Krish Bhaskar's eminently readable, and for the layman very understandable, examination of the audit market is an essential read for all those who are seeking wisdom about what today's accountants are up to and the major issues facing the profession. It is a balanced account, drawing on ranges of opinion from academics, professionals and regulators alike. An important book for today.",

"Having held senior financial positions in the Middle East for several years, where I have found auditing standards of the Big Four are still of poor quality and very often with auditors' independence undermined by conflicts of interest, Professor Krish Bhaskar’s factual research, detailed analyses and conclusions in this eye-opening book, should be a wake-up call to the accountancy profession and the regulatory authorities, not just in the UK, but internationally. This balanced and thought-provoking work deserves urgent attention to protect both investors and the reputation of the accountancy profession.",