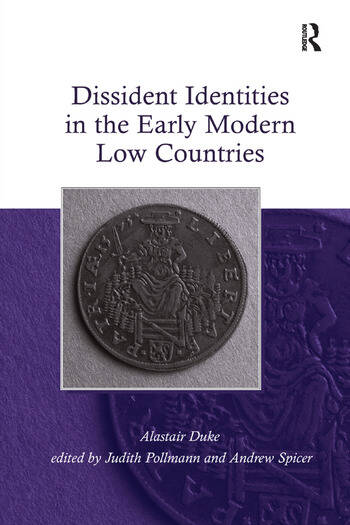 Alastair Duke has long been recognized as one of the leading scholars of the early modern Netherlands, known internationally for his important work on the impact of religious change on political events which was the focus of his Reformation and Revolt in the Low Countries (1990). Bringing together an updated selection of his previously published essays - together with one entirely new chapter and two that appear in English here for the first time - this volume explores the emergence of new political and religious identities in the early modern Netherlands. Firstly it analyses the emergence of a common identity amongst the amorphous collection of states in north-western Europe that were united first under the rule of the Valois Dukes of Burgundy and later the Habsburg princes, and traces the fortunes of this notion during the political and religious conflicts that divided the Low Countries during the second half of the sixteenth century. A second group of essays considers the emergence of dissidence and opposition to the regime, and explores how this was expressed and disseminated through popular culture. Finally, the volume shows how in the age of confessionalisation and civil war, challenging issues of identity presented themselves to both dissenting groups and individuals. Taken together these essays demonstrate how these dissident identities shaped and contributed to the development of the Netherlands during the early modern period.

Contents: By way of introduction; The elusive Netherlands: the question of national identity in the early modern Low Countries on the eve of the Revolt; In defence of the common fatherland: patriotism and liberty in the Low countries, 1555-1576; Moulded by repression: the early Netherlands Reformation, 1520-55; The 'inquisition' and the repression of religious dissent in the Habsburg Netherlands, 1521-1566; A legend in the making: news of the 'Spanish Inquisition' in the Low Countries in German evangelical pamphlets, 1546-1550; Dissident propaganda and political organisation at the outbreak of the Revolt of the Netherlands; Posters, pamphlets and prints: the ways and means of disseminating dissident opinions on the eve of the Dutch Revolt; Calvinists and 'papist idolatry': the mentality of the image-breakers in 1566; Martyrs with a difference: Dutch Anabaptist victims of Elizabethan persecution; The search for religious identity in a confessional age: the conversions of Jean Haren (c.1545-c.1613); Calvinist loyalism. Jean Haren, Chimay and the demise of the Calvinist republic of Bruges; Bibliography; Index.

Dr Alastair Duke was formerly Reader in History at the University of Southampton and is the author of Reformation and Revolt in the Low Countries (1990). Judith Pollmann is Professor of the History and Culture of the Dutch Republic at Leiden University. Andrew Spicer is Professor of Early Modern European History; he is also Director of the AHRC, The Early Modern Parish Church Religious Landscape Project and Head of History and History of Art at Oxford Brookes University.

'Alastair Duke has long been recognised as the leading authority on the Dutch Reformation. This superb collection of recent essays offers the fruits of prolonged reflection on issues that have been at the heart of his research, religious identity, responses to persecution, the emergence of a sense of nation. Other essays represent new departures, with stimulating pieces on the history of print and propaganda. All scholars of sixteenth-century politics and religion will welcome publication of this outstanding volume.' Andrew Pettegree, University of St Andrews, UK 'Over the last fifty-odd years our understanding of the Revolt of the Netherlands has become completely transformed. Alastair Duke is among the historians who have done most to achieve this. These eleven essays - three of them entirely new, the others significantly revised - brilliantly illuminate the stark choices that religious dissidents and political rebels in the sixteenth century had to make. Using a tremendously varied and vast array of sources Duke elegantly invokes the anxieties of sixteenth century men and women, often with strong convictions, who nevertheless had no idea about the eventual outcome of the civil war that we call the Revolt of the Netherlands.' Henk van Nierop, University of Amsterdam, The Netherlands 'It will be clear that this collection of essays is of utmost importance for all scholars interested in the political, religious and cultural history of the 16th-century Low Countries.' Archiv fÃ¼r Reformationsgeschichte 'These and all of the other chapters in this work are interesting and we should be grateful to the editors and to Ashgate for bringing them together in a single work.' Sixteenth Century Journal 'Altogether, this is an exquisite collection that will be appreciated by students at all levels who are interested in the fascinating yet often complex history of the early modern Low Countries.' English Historical Review