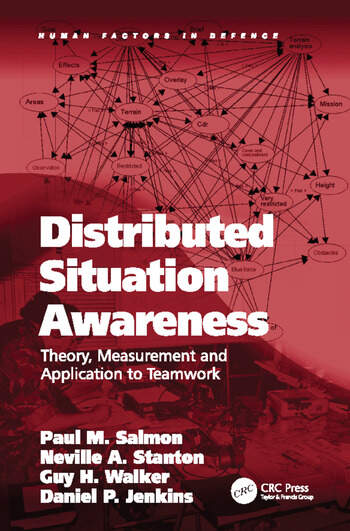 Having an accurate understanding of what is going on is a key commodity for teams working within military systems. 'Situation awareness' (SA) is the term that is used within human factors circles to describe the level of awareness that operators have of the situation that they are engaged in; it focuses on how operators develop and maintain a sufficient understanding of 'what is going on' in order to achieve success in task performance. Over the past two decades, the construct has become a fundamental theme within the areas of system design and evaluation and has received considerable attention from the human factors research community. Despite this, there is still considerable debate over how SA operates in complex collaborative systems and how SA achievement and maintenance is best supported through system, procedure and interface design. This book focuses on the recently developed concept of distributed situation awareness, which takes a systems perspective on the concept and moves the focus on situation awareness out of the heads of individual operators and on to the overall joint cognitive system consisting of human and technological agents. Situation awareness is viewed as an emergent property of collaborative systems, something that resides in the interaction between elements of the system and not in the heads of individual operators working in that system. The first part of the book presents a comprehensive review and critique of existing SA theory and measurement approaches, following which a novel model for complex collaborative systems, the distributed SA model, and a new modelling procedure, the propositional network approach, are outlined and demonstrated. The next part focuses on real-world applications of the model and modelling procedure, and presents four case studies undertaken in the land warfare, multinational warfare and energy distribution domains. Each case study is described in terms of the domain in question, the methodology employed, and the findings derived in relation to situation awareness theory. The third and final part of the book then concentrates on theoretical development, and uses the academic literature and the findings from the case study applications to validate and extend the distributed SA model described at the beginning of the book. In closing, the utility of the distributed SA model and modeling procedure are outlined and a series of initial guidelines for supporting distributed SA through system design are articulated.

Paul Salmon is a Senior Research Fellow within the Human Factors Group at the Monash University Accident Research Centre and holds a BSc in Sports Science, an MSc in Applied Ergonomics, and a PhD in Human Factors. Paul has over seven years experience in applied human factors research in a number of domains, including the military, aviation, rail and road transport and has worked on a variety of research projects in these areas. This has led to Paul gaining expertise in a broad range of areas, including situation awareness, human error and the application of human factors methods, including human error identification, situation awareness measurement, teamwork assessment, task analysis and cognitive task analysis methods. Paul's current research interests include the areas of situation awareness, human error and the application of human factors methods in sport. Paul has authored and co-authored various scientific journal articles, conference articles, book chapters and books and was recently awarded the 2006 Royal Aeronautical Society Hodgson Prize for a co-authored paper in the society's Aeronautical journal. Paul and his colleagues from the HFI DTC consortium were also awarded the Ergonomics Society's President's Medal in 2008. Professor Neville Stanton holds a Chair in Human Factors in the School of Civil Engineering and the Environment at the University of Southampton. He has published over 140 peer-reviewed journal papers and 14 books on Human Factors and Ergonomics. In 1998 he was awarded the Institution of Electrical Engineers Divisional Premium Award for a co-authored paper on Engineering Psychology and System Safety. The Ergonomics Society awarded him the Otto Edholm medal in 2001 and The President's Medal in 2008 for his contribution to basic and applied ergonomics research. In 2007 The Royal Aeronautical Society awarded him the Hodgson Medal and Bronze Award with colleagues for their work on flight deck safety. Professor Stanton is an editor of the journal Ergonomics and on the editorial boards of Theoretical Issues in Ergonomics Science and the International Journal of Human Computer Interaction. Professor Stanton is a Fellow and Chartered Occupational Psychologist registered with The British Psychological Society, and a Fellow of The Ergonomics Society. He has a BSc (Hons) in Occupational Psychology from the University of Hull, an MPhil in Applied Psychology and a PhD in Human Factors from Aston University in Birmingham. Guy Walker read for a BSc Honours degree in Psychology at Southampton University specialising in engineering psychology, statistics and psychophysics. During his undergraduate studies he also undertook work in auditory perception laboratories at Essex University and the Applied Psychology Unit at Cambridge University. After graduating in 1999 he moved to Brunel University, gaining a PhD in Human Factors in 2002. His research focused on driver performance, situational awareness and the role of feedback in vehicles. Since this time Guy has worked for a human factors consultancy on a project funded by the Rail Safety and Standards Board, examining driver behaviour in relation to warning systems and alarms fitted in train cabs. Currently Guy works within the HFI DTC at Brunel University, engaged primarily in work on future C4i systems. He is also author of numerous journal articles and book contributions. Dan Jenkins graduated in 2004 from Brunel University with an M.Eng (Hons) in Mechanical Engineering and Design, receiving the 'University Prize' for the highest academic achievement in the school. As a sponsored student, Dan finished University with over two years experience as a Design Engineer in the Automotive Industry. Upon graduation, Dan went to work in Japan for a major car manufacturer, facilitating the necessary design changes to launch a new model in Europe. In 2005, Dan returned to Brunel University taking up the full-time role of Research Fellow in the Ergonomics Research Group, working primarily on the Human Factors Integration Defence Technology Centre (HFI DTC) project. Dan studied part-time on his PhD in human factors and interaction design - graduating in 2008, receiving the 'Hamilton Prize' for the Best Viva in the School of Engineering and Design. Both academically and within industry Dan has always had a strong focus on human factors, system optimisation and design for inclusion. Dan has authored and co-authored numerous journal paper, conference articles, book chapters and books. Dan and his colleagues on the HFI DTC project were awarded the Ergonomics Society's President's Medal in 2008.

'Situation awareness is a term that has consumed both practitioners and the Human Factors community with no agreed approach despite volumes of publications on this topic. This well referenced book provides a comprehensive review of the nature of the concept and how it has been measured that is useful for both novices and researchers in this field. It does not duck controversy and criticises traditional individual- and team-based models of SA, proposing instead a distributed account of SA across agents and artefacts in order to more fully understand collaborative work activities. This approach emanates from the conceptualisation of distributed cognition in the mid 1990s and not only advances models of SA but also challenges us to consider how analyses of distributed SA should be carried out. Case studies are provided together with some solutions for carrying out such analyses. The book is refreshingly provocative, advances this area and has to be a recommended read for everybody interested in this topic...' John Patrick, Cardiff University, UK '"Situation awareness" (SA) has a central, almost mythical status within the pantheon of military concepts. In presenting their theory of distributed situation awareness (DSA), the authors make a radical departure from existing models.' Australian Defence Force Journal, September 2010 'Distributed Situation Awareness: Theory, Measurement and Application to Teamwork makes three broad contributions (literature reviews, case studies, and synthesis of findings), each of which makes a significant contribution to the understanding of SA. The book is well written, well referenced, with a logical structure and a consistent style (difficult to obtain in multi-author texts). Importantly, it ends with 18 very useful guidelines to assist designers of command and control systems to achieve distributed SA. Distributed Situation Awareness: Theory, Measurement and Application to Teamwork makes an excellent contribution to the understanding