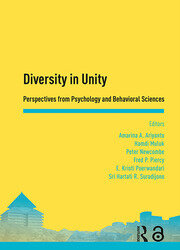 The book highlights both the challenges and opportunities in the field of psychology and behavioral sciences, with an emphasis on identifying practical implications for professionals, educators and administrators, and researchers in Asia and Pacific regions. Societies in the said regions have experienced massive changes to their social system, changes that are endured by societies worldwide, such as those related to globalization, new technologies, and new norms regarding respect for individual diversity and well-being. Although the changes offer a wealth of new opportunities, they also act as potential sources of tension and apprehension. The book discusses the state-of-the-art topics, on critical issues, in various sub-fields of psychology and the behavioral sciences, such as Clinical Psychology, Child & Developmental Psychology, Industrial & Organizational Psychology, Experimental Psychology, Social Psychology, and Educational Psychology.

This is an Open Access ebook, and can be found on www.taylorfrancis.com.

The role of family strength on the relationship of parentification and delinquent behaviour in adolescents from poor families
F. Nurwianti, E.K. Poerwandari & A.S. Ginanjar

The impact of self-efficacy on health behaviour in young adults whose mothers were diagnosed with breast cancer
G. Fatimah & L.D. Pohan

A comparative study: The effect of self-esteem and anger coping strategies on the level of anger among ordinary teenagers and teenage prisoners
M.A. Putri & P. Hidayah

The contribution of parenting style and theory of mind to the understanding of morally relevant theory of mind in Indonesian children
I.A. Kuntoro, G. Dwiputri & P. Adams

The effectiveness of a training programme for kindergarten teachers to teach critical thinking in science learning
J. Suleeman & Y. Widiastuti

The relationship between social expectation and self-identity among adolescents
J. Suleeman & N. Saputra

Training a father to better use prompt and reinforcement: Effects on the initiation of joint attention in a child with pervasive developmental disorder, not otherwise specified
H. Ekapraja, F. Kurniawati & S.Y. Indrasari

Challenges to facilitating social interaction among students in the inclusive classroom: Relationship between teachers’ attitudes and their strategies
Y. Candraresmi & F. Kurniawati

The use of the pajares principles to increase mathematics self-efficacy in a middle childhood student
A. Selandia, W. Prasetyawati & R.M.A. Prianto

Successful implementation of inclusive education on primary school: Roles of teachers’ attitudes and their emotional support for students with special educational needs
A. Virgina & F. Kurniawati

Me or us? How values (power and benevolence) influence helping behaviour at work
N. Grasiaswaty, D.E. Purba & E. Parahyanti

The effect of psychological capital as a mediator variable on the relationship between work happiness and innovative work behavior
A. Etikariena

The role of work-life balance as a mediator between psychological climate and organizational commitment of lecturers in higher education institutions
V. Varias & A.N.L. Seniati

The role of job embeddedness as a mediator in the relationship between job demand resources and turnover intentions
T.A.P. Atan & D.E. Purba

Positive identity as a leader in Indonesia: It is your traits that count, not your gender
C.D. Riantoputra, A.M. Bastaman & H.C. Duarsa

The role of professional commitment as a mediator in the relationship between job satisfaction and organizational commitment among lecturers in higher-education institutions
R.L. Sari & A.N.L. Seniati

Role of job satisfaction as a mediator in the relationship between psychological climate and organisational commitment of lecturers at higher education institutions
A. Krishnamurti & A.N.L. Seniati

Intergenerational differences in shame and guilt emotions and the dissemination of cultural values among the Buginese
Z.Z. Irawan & L.R.M. Royanto

To be leader or not to be leader? Correlation between men’s negative presumption toward women leaders and women’s leadership aspirations
N.I. Muthi’ah, E.K. Poerwandari & I. Primasari

Democratic quality as a predictor of subjective well-being
B. Takwin

Better now than later: The effect of delayed feedback from the receiver of a thank-you letter on the sender’s happiness
A. Kartika, I.I.D. Oriza & B. Takwin

The role of bystanders’ psychological well-being and gender as moderators of helping behaviour in bullying incidences
R. Djuwita & F.M. Mangunsong

The effect of job satisfaction in employee’s readiness for change
M.V. Azra, A. Etikariena & F.F. Haryoko

The important role of leader-member exchange in the relationship between cognitive and affective trust and leader effectiveness
A. Mustika & C.D. Riantoputra

The correlation between motivational values and emotions of shame and guilt in adolescents
M. Tarisa & L.R.M. Royanto

The role of the shame (isin) moral value in Javanese culture and its impact on personality traits, and shame and guilt emotions of the young Javanese generation
G.S. Prayitno, H.S.S. Sukirna & C. Amelda

The association between the five-factor model of personality and the subjective well-being of Abdi Dalem of the Keraton Kasunanan Surakarta Hadiningrat
M.A. Alhad & S.S. Turnip

The effect of positive electronic word-of-mouth element variation on intention to use the TransJakarta bus
F.I. Rodhiya & B. Sjabadhyni

Seeking context for the theory of the enforceability of the moral licensing effect in a collectivist culture: When moral surplus leads law enforcers to get involved in corruption
N.M.M. Puteri, H. Muluk & A.A. Riyanto

Exploration of moderation effect of price on the relationship between observational cues and sustainable consumption
G.C. Wajong & E. Narhetali

The need for cognitive closure and belief in conspiracy theories: An exploration of the role of religious fundamentalism in cognition
A.N. Umam, H. Muluk & M.N. Milla

Hamdi Muluk is a senior lecturer at the Faculty of Psychology, Universitas Indonesia. He obtained his Ph.D in Political Psychology from Universitas Indonesia. His research interest is in social and political psychology, such as terrorism, prejudice, voting behavior, and conflict resolution. His current research is on the effects of cognition, emotion, and contact between groups among the fundamentalist religious groups. He has published in various journals such as Asian Journal of Psychology, Archive for The Psychology of Religion, Peace Psychology, and Jurnal Psikologi Sosial (JPS). He has been a consulting editor for Asian Social Psychology Journal.

Peter Newcombe is associate professor at the School of Psychology at the University of Queensland, Australia. Peter is a developmental psychologist who has been involved with the School since completing his University studies in 1997. He has received Faculty, University, and national teaching awards and teaches into the linked psychology program with the University of Indonesia. His recent research has focused on quality of life issues and psycho-social wellbeing of children with chronic respiratory illnesses.

Fred Piercy is professor emeritus at the College of Liberal Arts and Humanities at Virginia Tech. His main research interests are family therapy education, international family therapy and substance abuse and family therapy.

Elizabeth Kristi Poerwandari is a senior lecturer at the Faculty of Psychology and at School of Strategic and Global Studies. Universitas Indonesia. She is a psychologist with a doctoral degree in philosophy from Universitas Indonesia. Her research interest is in the area of psychology of violence, trauma intervention, community development, gender studies, qualitative research, and psychology of law. Kristi is in the editorial committee of the Asian Journal of Women’s Studies, and the editor of "Indonesian Women in a Changing Society", (Ewha Womens University Press, Korea, 2005). She has written books on community-based psychosocial recovery and empowerment; qualitative research; prevention and intervention of violence, and gender issues. Her articles appear in Indonesian Feminist Journal, the Asian Journal of Women’s Studies and in several national journals in Indonesia.

is a senior lecturer at the Faculty of Psychology, Universitas Indonesia. She obtained her Ph.D in Cognitive Science from University of Toronto. Her research interest is in the area of metacognition, critical thinking, self-regulation, e-learning, and IT-based instructional design. She has done research on the use of ICT in education, the role of instructional design in enhancing higher-order thinking skills, knowledge building, and teaching-learning in Higher Education,. She was the editorial member of The Makara Journal of Social Humanities. Mostly her research reports were published by the IDRC-Canada, AusAID, World Bank, and Unicef.