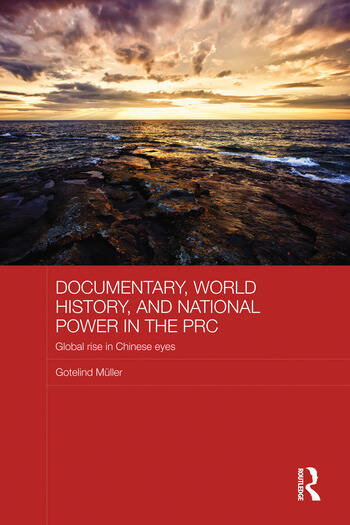 Documentaries have recently become a favourite format for Chinese state-directed media to present an officially sanctioned view of history. Indeed, this is not confined to Chinese national history. In stark contrast to the earlier self-centred preoccupation with Chinese history, there has been an upsurge in interest in foreign history, with a view to illuminating China’s role not only in world history, but also on the global stage today, and in the future.

This book examines three recent Chinese documentary television series which present the officially sanctioned view of the rise of the modern West, the reasons for the end of the Soviet Union, and the legitimisation of the present-day Chinese government via a specific reading of modern Chinese history to argue for a ‘Chinese rise’ in the future. With a focus on these documentaries, Gotelind Müller discusses how history is presented on screen, and explores the function of visual history for memory culture and wider society. Further, this book reveals how the presentation of Chinese and foreign history in a global framework impacts on the officially transmitted views on Self and Other, and thus provides a keen insight into how the Chinese themselves regard their ‘global rise’.

Documentary, World History, and National Power in the PRC

will be welcomed by students and scholars working across a number of fields, including Chinese studies, East Asian studies, media studies, television studies, history and memory studies.

1. Introduction 2. Foreign models for the public: the TV documentary Daguo jueqi (The Rise of the Great Powers) 3. China’s potentials on display: the sequel documentary Fuxing zhi lu (Road to Revival) 4. Soviet failure lessons for insiders: the party-educational documentary Ju an si wei (Alert to Danger while Dwelling in Safety) 5. Framing visions of China and the world: the state, documentary, and history in comparative perspective

Gotelind Müller is Professor of Chinese Studies at the University of Heidelberg, Germany.

"Mueller capitalizes on the recent Chinese interest in foreign history and how China's own global rise aligns with that interest. She captures the essence of this movement by carefully analyzing three recent Chinese documentary television series: Daguo jueqi (The Rise of the Great Powers), Fuxing zhi lu (The Road to Revival), and Ju an si wei (Alert to Danger while Dwelling in Safety) ... Mueller's examination of the series is thorough, including detailed textual analysis, coupled with much secondary literature, from both academic and journalistic sources. Particularly instructive is the final chapter, in which the author offers a theoretical discussion of how history is presented on screen, whether in historical films, documentaries, or docudramas. The content and organization are excellent.
Summing Up: Recommended. Upper-division undergraduates through faculty." J. A. Lent, USA, CHOICE, July 2014

"The monograph under review is a truly innovative work which is situated at the intersection of Oriental studies, imagology, media research and "memory studies", the latter functioning as a new paradigm in contemporary humanities.

The brilliant and multi-faceted work by Professor Gotelind Müller makes us realize, firstly, the necessity of widening the realm of Sinological research as well as of drawing on new scientific paradigms characteristic of contemporary humanities; secondly, that mass consciousness is not as much affected by scientific research itself as by its interpretations by the mass media (in this concrete case by documentary series, which is a highly important issue not only for China); and, thirdly, that countries of Asia and Africa are rethinking their place in world history, which should be carefully watched and analyzed by scholars engaged in Oriental studies."