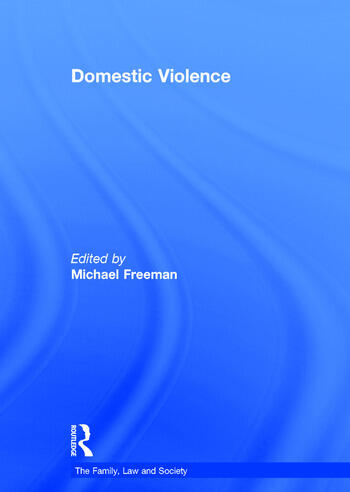 Domestic violence - domestic hooliganism it has been called - is one of the cancers of our age. This volume offers a challenging selection of materials as a picture of a multi-faceted problem. The issues embraced range from criminal and civil law responses and the value of mediation, to the impact on children, and to the cultural context. The materials are derived from a variety of sources and from different disciplines to offer the reader an understanding of the problem not easily culled from standard library resources.

Michael Freeman is Professor of English Law at University College London. His research interests are in cultural pluralism in particular in relation to the rights of children and in medical ethics particularly in relation to medically assisted reproduction.He has published in the areas of Family Law, Child Law and Policy, Children's Rights, Medicine, Ethics and the Law and Medical Law, Jurisprudence and Legal Theory. He is the author of over 40 books, editor of a large number of international journals and a Fellow of the British Academy.

'This book offers a major contribution to Domestic Violence by bringing together a varied literature in a focused manner...' British Journal of Criminology 'strongly recommended' Social Policy