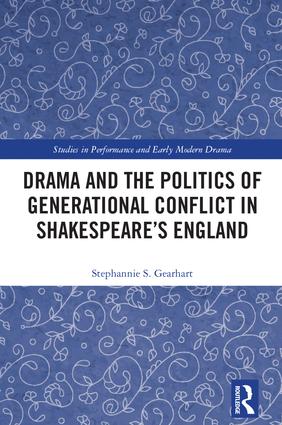 Drama and the Politics of Generational Conflict in Shakespeare's England

Drama and the Politics of Generational Conflict in Shakespeare’s England examines the intersection between art and culture and explains how ideas about age circulated in early modern England. Stephannie Gearhart illustrates how a variety of texts – including drama by Shakespeare, Jonson, and Middleton – placed elders’ and youths’ voices in dialogue with one another to construct the period’s ideology of age and shape elder-youth relations.

1. Blood vs. manners: youth’s quest for independence in The Merchant of Venice

2. Familial contracts: financial inheritance in the plays of Jonson and Middleton

3. "The very latest counsel that ever I shall breathe": 2 Henry IV, Hamlet, and ideological inheritance

4 Old fools and serpents’ teeth: defining age and the terms of the parent-child relationship in King Lear

This series presents original research on theatre histories and performance histories; the time period covered is from about 1500 to the early 18th century. Studies in which women's activities are a central feature of discussion are especially of interest; this may include women as financial or technical support (patrons, musicians, dancers, seamstresses, wig-makers) or house support staff (e.g., gatherers), rather than performance per se. We also welcome critiques of early modern drama that take into account the production values of the plays and rely on period records of performance.