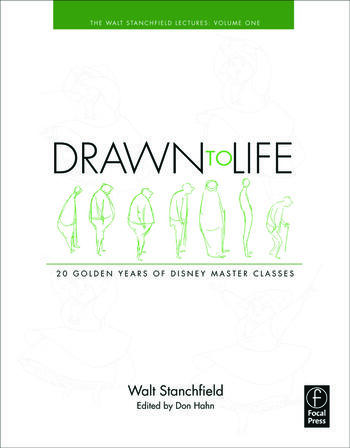 Discover the lessons that helped bring about a new golden age of Disney animation!Published for the first time ever, Drawn to Life is a two volume collection of the legendary lectures from long-time Disney animator Walt Stanchfield. For over twenty years, Walt helped breathe life into the new golden age of animation with these teachings at the Walt Disney Animation Studios and influenced such talented artists as Tim Burton, Brad Bird, Glen Keane, and John Lasseter. These writings represent the quintessential refresher for fine artists and film professionals, and it is a vital tutorial for students who are now poised to be part of another new generation in the art form.Written by Walt Stanchfield (1919-2000), who began work for the Walt Disney Studios in the 1950s. His work can be seen in films like Sleeping Beauty, The Jungle Book, 101 Dalmatians, and Peter Pan.Edited by Academy Award®-nominated producer Don Hahn, who has prduced such classic Disney films as Beauty and the Beast and The Lion King.

For nearly thirty years, the artists that passed through the gates of Disney Animation, and even non-artists like myself, were influenced by the craft, skill, wisdom, writings and sketches of Walt Stanchfield.

Walt was a kind of Mark Twain for us at Disney. He always taught with humor and skill. You learned to see the world through his eyes. I remember him one day encouraging us to leap into our drawings with boldness and confidence, "Don't be afraid to make a mistake. We all have 10,000 bad drawings in us so the sooner you get them out the better!" Sitting in Walt's class was as much a psychology course as it was a drawing class. One couldn't help walk away with your mind and soul a little more open than when you entered.

Walt Stanchfield's classes and writings were little distillations of the man: quirky, strongly stated in a genial voice, and brimming with a lifetime of sharp observations about story telling and graphic communication. Whether he drew with a ball point pen or painted with a brush dipped in his coffee cup, he got to the essence of things and was eager to share what he learned to his eager disciples, myself among them. He was grizzled and he was great and proof that there was more than one Walt at the Disney Studio that could inspire a legion of artists.

Walt Stanchfield was one of Disney Animation's national treasures. His classes and notes have inspired countless animation artists, and his approach to drawing of caricature over reality, feeling over rote accuracy, and communication over photographic reproduction gets to the heart of what great animation is all about. Huzzah to Don Hahn for putting it all together for us!

During the Animation Renaissance of the 1990s, one of the Walt Disney Studio's best kept secrets was Walt Stanchfield. Once a week after work, this aged but agile figure jumped from drawing board to drawing board, patiently teaching us the principles behind the high baroque style of Walt Disney Animation drawing. Being in a room with Walt made you feel what it must have been like to have been taught by Don Graham. Having one of your life drawings be good enough to be reproduced in one of his little homemade weekly bulletins was akin to getting a Distinguished Service medal! Senior animators vied with trainees for that distinction.

Tom Sito, Animator/Filmmaker/Author of Drawing The Line: The Untold Story of the Animation Unions from Bosko to Bart Simpson

This exciting collection of master classes by the great teacher Walt Stanchfield is destined to become a classic on the order of Kimon Nicolaides' exploration of the drawing process. Stanchfield (1919-2000) inspired several generations of Disney animators and those of us outside the studio fortunate enough to happen upon dog-eared copies of his conversational notes, which we passed around like Leonardo's Codex Leicester. Stanchfield beautifully communicates the essence and joy of expressing ideas through the graphic line and accumulating a visual vocabulary. DRAWN TO LIFE is a treasure trove of cogent, valuable information for students, teachers and anyone who loves to draw.

Walt Stanchfield, in his own unique way, taught so many of us about drawing, caricature, motion, acting and animation. Most important to me, was how Walt made you apply what you had observed in his life drawing class to your animation. Disney Animation is based on real life, and in that regard Walt Stanchfield's philosophy echoed Walt Disney's:

'We cannot caricature and animate anything convincingly until we study the real thing first.'

Walt Stanchfield's renewed emphasis on draftsmanship at the Disney Studios transformed the seemingly moribund art of animation. His students were part of a renaissance with The Little Mermaid and Who Framed Roger Rabbit, a renaissance that continues with films ranging from The Iron Giant to Lilo and Stitch to Wall-E.

I'm so grateful to Focal Press for publishing these fabulous Walt Stanchfield books. They are veritable 'gold dust' for the serious (and aspiring) animator! So 'hurrah' to Focal and 'hurrah' to Don Hahn to committing himself to compiling them. I ordered my copies the minute I saw them and will of course hope my students are smart enough to do so too!

Tony White, DigiPen, Author of 'Animation: From Pencil to Pixels' and 'How to Make Animated Films'