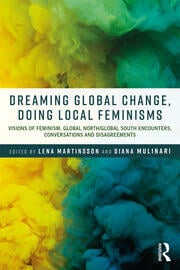 In a world where frontiers are militarised and classifications systems defining rights and belonging are reinforced, transnational feminist agendas are fundamental. We use the concept of ‘scholarships of hope’ to analyse the diversity of feminist struggles and imaginaries in diverse geopolitical locations.

In conjunction, these chapters provide a solid analysis framed by feminist methodologies opening complexities and contradictions of individual and collective feminist and trans identity struggles in Argentina, Belarus, Pakistan, Sweden, Taiwan and Turkey. These identities and struggles are rooted in transnational and local genealogies that go beyond the narratives of the West as the origin for democracy and human rights, providing powerful agendas for alternative futures.

4. In, against (and beyond?) the state: women's rights, global gender equality regime, and feminist counterpublics in 21st-century Turkey, Selin Çağatay

6. Dreaming of home: a feminist strategy for importing the Nordic model to Taiwan, Chia-Ling Yang

Lena Martinsson is Professor in Gender Studies at the University of Gothenburg, Sweden. Her main research interests are political subjectivity, social movements and transnationalism in the field of feminist and post/decolonial studies. Her recent publications include: Martinsson, L., Griffin, G., and Nygren K.G., (eds.). (2016) Challenging the Myth of Gender Equality in Sweden. Bristol: Policy Press, and Reimers, E., and Martinsson, L., (eds.). (2017) Education and Political Subjectivities in Neoliberal Times and Places: Emergences of Norms and Possibilities. London: Routledge.

Diana Mulinari is Professor in Gender Studies at the University of Lund, Sweden. She works within the field of studies of racism in the tradition of Black/Chicano and decolonial feminists. Her recent publications include: Mulinari, D., and Neergaard, A., (2017) Theorising racism: Exploring the Swedish racial regime. Nordic Journal of Migration. 7(2), and Rätzhel, N., Mulinari, D., and Tollefson, A., (2014) Transnational Corporations from the Standpoint of Workers: Thrown Together, Working Apart. London: Palgrave Macmillan.