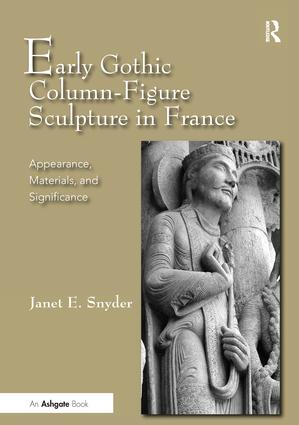 Richly illustrated, Early Gothic Column-Figure Sculpture in France is a comprehensive investigation of church portal sculpture installed between the 1130s and the 1170s. At more than twenty great churches, beginning at the Royal Abbey of Saint-Denis and extending around Paris from Provins in the east, south to Bourges and Dijon, and west to Chartres and Angers, larger than life-size statues of human figures were arranged along portal jambs, many carved as if wearing the dress of the highest ranks of French society. This study takes a close look at twelfth-century human figure sculpture, describing represented clothing, defining the language of textiles and dress that would have been legible in the twelfth-century, and investigating rationale and significance. The concepts conveyed through these extraordinary visual documents and the possible motivations of the patrons of portal programs with column-figures are examined through contemporaneous historical, textual, and visual evidence in various media. Appendices include analysis of sculpture production, and the transportation and fabrication in limestone from Paris. Janet Snyder's new study considers how patrons used sculpture to express and shape perceived reality, employing images of textiles and clothing that had political, economic, and social significances.

Prize: Winner of the SECAC Award for Excellence in Scholarly Research, 2012

'Snyder’s investigation of the sudden profusion of French gothic column figures in the decades of the 1130s-70s is a tour-de-force study of the design and meaning of these enigmatically complex sculpted portal programs. By concentrating on the column figures’ appearance, notably their garments, and placing them within a well-supported social and political context, she provides us with an important new means by which to comprehend not only their significance as bearers of meaning, but also their stylistic development. The interdisciplinary nature of this book will without doubt be of interest to a broad audience of medievalists, among them students and scholars of gothic sculpture, medieval clothing and textiles, and medieval commerce, trade and politics.' Vibeke Olson, University of North Carolina-Wilmington, USA

'… Snyder’s study is a worthy contribution to the literature on the Gothic column-figure. The author’s expertise in costume design and history provides the reader with a wealth of information on medieval dress of the period. More importantly, Snyder forces us to reconsider the meaning and function of these figures. Through this analysis the column-figures and the portals they inhabit become localized, embedded in the life of their particular time and place, rather than generalized and abstracted diagrams of theology. For this Snyder’s study deserves commendation.' Speculum

Contents: Preface; Introduction; Secret signals: the meaning of clothing in sculpture; Structures of power: the support of the peers; Good business: commerce in the North; Significant stuff: textiles and a language of dress; Appendices; Bibliography; Index.