Early Islamic Theology: The Mu`tazilites and al-Ash`ari
Texts and Studies on the Development and History of Kalam, Vol. II 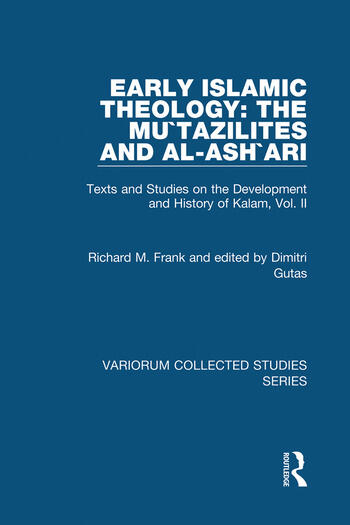 Early Islamic Theology: The Mu`tazilites and al-Ash`ari: Texts and Studies on the Development and History of Kalam, Vol. II

This is the second of three volumes reprinting the collected papers on Islamic subjects by Richard M. Frank, Professor Emeritus at the Catholic University of America. It brings together Franks's articles on early kalam, the Mu`tazilites, and the development of the thought of al-Ash`ari. The studies in this collection are of particular importance for the study of kalam, in that they represent an original attempt to make philosophical sense and understand the theoretical underpinnings of the foundational theological tradition in early Islam, the Mu`tazilite school of Basra. They focus, among others, on Abu l-Hudhayl al-`Allaf, al-Jubba`i, and al-Ash`ari, and include a critical edition and translation of the latter's al-Hathth `ala l-bahth.

Contents: Foreword; The metaphysics of created being according to Abu l-Hudhayl al-`Allaf; a philosophical study of the earliest kalam; The divine attributes according to Abu l-Hudhayl al-`Allaf; Several fundamental assumptions of the Basra school of the Mu`tazila; Al-ma`dum wal-mawjud: the non-existent, the existent, and the possible in the teaching of Abu Hashim and his followers; Abu Hashim's theory of 'states', its structure and function; Elements in the development of the teaching of al-Ash`ari; The structure of created causality according to al-Ash`ari: an analysis of the Kitab al-Luma`, Â§Â§ 82-164; Al-Ash`ari's conception of the nature and role of speculative reasoning in theology; Al-Ash`ari's Kitab al-Hathth `ala l-Bahth; Index.

Richard M. Frank is Emeritus Professor in the Department of Semitic and Egyptian Languages and Literatures, at the Catholic University of America, USA.

’Like the first volume, this new collection makes available a number of very valuable articles, some of which were originally published in hard-to-find proceedings or journals. Professor Gutas has done a fine job of selecting the nine articles; one cannot imagine a better-fitting group of articles for a Variorum book. Gutas is also to be commended for overseeing the production of the three exhaustive indexes (one for names and subjects, one for Arabic terms, and one for Greek and Syriac terms), which make the articles searchable and enhance their usability for scholars of Islamic studies.’ Bulletin of the School of Oriental and African Studies