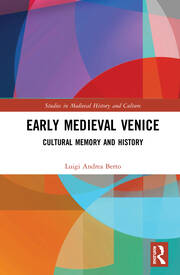 Early Medieval Venice examines the significant changes that Venice underwent between the late-sixth and the early-eleventh centuries. From the periphery of the Byzantine Empire, Venice acquired complete independence and emerged as the major power in the Adriatic area. It also avoided absorption by neighbouring rulers, prevented serious destruction by raiders, and achieved a stable state organization, all the while progressively extending its trading activities to most of northern Italy and the eastern Mediterranean. This was not a linear process, but the Venetians obtained and defended these results with great tenacity, creating the foundations for the remarkable developments of the following centuries.

This book presents the most relevant themes that characterized Venice during this epoch, including war, violence, and the manner in which ‘others’ were perceived. It examines how early medieval authors and modern scholars have portrayed this period, and how they were sometimes influenced by their own ‘present’ in their reconstruction of the past.

1. War and violence in early medieval Venice: Perceptions and mentality

2. Peter IV Candiano: a duke deposed because he was too virtuous or too authoritarian?

3. Under the ‘Romans’ or under the Franks? Venice between two empires

4. Rumors of wars and deeds of emperors: Circulation of news and ‘stories’ about non-Venetians in early medieval Venice

6. All is well on the Western Front? The image of the early medieval Venetian frontier between the second and the third Millennium.

7. Remaining Roman on the frontier? The Latin and Greek onomastics of eighth-century Lombard Treviso and its relationship with early medieval Venice

8. ‘As an angel revealed to her’: Miracles, visions, predictions, and supernatural phenomena and the politics of memory in early medieval Venice.

Luigi Andrea Berto is Professor of Medieval History at Western Michigan University, USA. His research focuses on medieval Italy and the Mediterranean, and the relationships between Christians and Muslims.