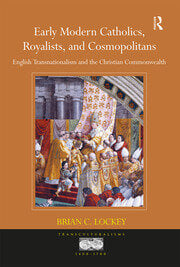 Early Modern Catholics, Royalists, and Cosmopolitans considers how the marginalized perspective of 16th-century English Catholic exiles and 17th-century English royalist exiles helped to generate a form of cosmopolitanism that was rooted in contemporary religious and national identities but also transcended those identities. Author Brian C. Lockey argues that English discourses of nationhood were in conversation with two opposing 'cosmopolitan' perspectives, one that sought to cultivate and sustain the emerging English nationalism and imperialism and another that challenged English nationhood from the perspective of those Englishmen who viewed the kingdom as one province within the larger transnational Christian commonwealth. Lockey illustrates how the latter cosmopolitan perspective, produced within two communities of exiled English subjects, separated in time by half a century, influenced fiction writers such as Sir Philip Sidney, Edmund Spenser, Anthony Munday, Sir John Harington, John Milton, and Aphra Behn. Ultimately, he shows that early modern cosmopolitans critiqued the emerging discourse of English nationhood from a traditional religious and political perspective, even as their writings eventually gave rise to later secular Enlightenment forms of cosmopolitanism.

Brian C. Lockey is Professor of English Literature at St. John's University, USA. He is also the author of Law and Empire in English Renaissance Literature (Cambridge, 2006).

"...the value of this text is in its presentation of a variety of cosmopolitanisms emerging in the space between the traditional Christian commonwealth and secularized brotherhood of nations...Lockey’s analysis reveals a variety of hybrid understandings of cosmopolitanism and transnationalism
based on combinations of religious, secular, capitalist, philosophical and other influences that are much more varied than in the usual, secularized nation-state narratives." - Lisa McClain, Boise State University, Journal of British Studies

"Ambitiously spanning two centuries and numerous source texts, Brian Lockey’s Early Modern Catholics, Royalists and Cosmopolitans is a thorough and thought-provoking study into a newly emerging discourse on cosmopolitanism within England in the sixteenth and seventeenth centuries... Well-evidenced and intriguing, Lockey has produced a work that will be approached in years to come from many different disciplines. This book will be invaluable to any critics of religious identities, nation, and selfhood within the early modern period." - Sophie Jane Buckingham, University of East Anglia, Renaissance Studies

"The book as a whole is lively, interesting, and brings a welcome internationalist perspective to the study of early-modern English literature. Throughout, there is a welcome emphasis on Latinity (Osorio, Haddon, Campion) and on translation (Harington, Fanshawe) as parallel vehicles of international communication within Christian Europe... Each of [these chapters] teases out internationalist concerns within the works they cover. At the very least they remind us that even the most Protestant fictions in early modern England were not as straight-forwardly nationalist as recent scholarship might lead us to think." - Paul Arblaster, Saint-Louis University, Brussels, Reformation

"Lockey clearly emphasizes that 'English cosmopolitanism was first and foremost traditional and conservative' (314), although it served as a challenge to the emerging national narratives, and it contained the potential to be stripped of its more obviously conservative manifestations. It could be employed, for example, by writers who were working in the Protestant tradition, who introduced a transnational approach inherited from 'a prohibited ideology' (315). His monograph offers a careful exploration of early modern texts and a thought-provoking read for scholars working in the discipline of history as well as English literature." Katy Gibbons, University of Portsmouth, Renaissance Quarterly.

"Lockey’s book is an important one that, in its pairing of canonical texts with less- studied texts from both England and the Continent, makes a valuable contribution to current conversations about religion, national identity, and political culture in early modern Europe." - Laurie Ellinghausen, Journal for Early Modern Cultural Studies