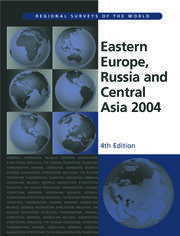 Extensive coverage of the political, economic and social affairs of the region.
This impartial up-to-date survey of the countries and territories that make up the region includes:
* Over 600 pages of current political, economic and social affairs
* Incisive analysis by acknowledged experts
* The latest statistics on the major economic indicators and population
* Invaluable directory material.

Political Profiles
* Biographical details on the leading figures in the region.

'Eastern Europe, Russia and Central Asia is an important new guide to the region.' - Reference Reviews