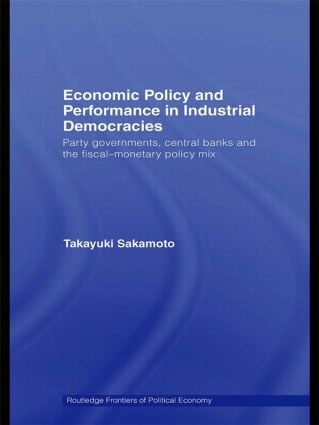 Sakamoto also demonstrates that the economic policy of industrial democracies did really change from the 1960s-1970s to the 1980s-1990s and became conservative as a result of the globalization of the economy and governments’ response to it. But he argues that despite the neo-liberal policy shift, globalization has not diminished the role of domestic politics in economic policy.

"This book considers the joint choice of monetary and fiscal policy by monetary and fiscal authorities, the central bank and the government, which are separate entities with differing objectives insofar as the former is independent of the latter. It considers the combination of multiple characteristics of these governments and their institutional-structural environmentsâ€”left/right partisanship, fractionalization, labour-market organization and institutions, and election-year incentivesâ€”in explaining these policy choices. No previous work in political science of which I am aware gives as serious and sustained attention to this political economy of the joint fiscal/monetary choices of policymakers in as richly contextualized institutional-structural environments."