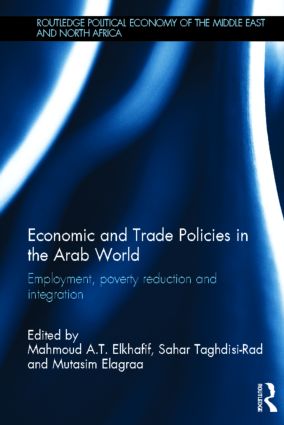 Economic and Trade Policies in the Arab World

The Arab Spring and recent popular uprisings that have taken place in many Arab countries since the end of 2010 highlight the urgent need for economic policy reorientation in these countries. This book addresses key issues relevant to the contemporary economic realities of the Arab economies; including policy space, generation of more productive and decent employment, social justice and poverty alleviation, regional integration and the common destiny of the Arab people, and the failure of the structural adjustment programs recommended by the Bretton Woods institutions and implemented in these countries in the last three decades.

The volume explores, and makes recommendations, for deep pan Arab regional integration and alternative pro-poor, growth-oriented economic and trade policies capable of promoting social justice by reducing the incidence of poverty. It highlights the ways in which various types of economic and trade policies have affected the levels of employment and poverty in five Arab countries: Egypt, Jordan, Morocco, the occupied Palestinian territory and Sudan. Using a mixture of qualitative and quantitative methodologies, the book focuses on Arab trade integration, exploring the obstacles to its implementation in the past, as well as its potentials as a source of employment generation and enhancement of living conditions. The book also addresses the construction, interpretation and use of quantitative trade indicators for optimal policy choice at both the domestic and regional levels.

Mahmoud A.T. Elkhafif is currently UNCTAD's Coordinator of Assistance to the Palestinian People. He has research interests in development economics and economic modelling and forecasting, and has published a book on the Egyptian economy, chapters in two books and several papers in internationally refereed journals. He holds a PhD and an MA in Economics and an MSc in Agricultural Economics.

Sahar Taghdisi-Rad is a former Eonomist at UNCTAD. She is currently a Research Economist at the Centre for Development Policy Research, SOAS, and the School of Governance and International Relations, Queen Mary, University of London, UK. She is the author of The Political Economy of Aid in Palestine: Relief from Conflict or Dvelopment Dlayed? (2011), Routledge.

Mutasim Elagraa is a First Econominc Affairs Officer at UNCTAD. He holds an MA and a PhD in Economics from the University of Toronto, Ontario, Canada. His areas of specialization are international economics and development economics. Before joining UNCTAD, he worked for Daewoo International Corporation and various private sector corporations.

Routledge Political Economy of the Middle East and North Africa

The Middle East continues to dominate in the news and current affairs coverage of the media both in global and regional contexts. Despite this growing and intensified interest in recent years, it is widely recognised that the region is largely underrepresented in a range of disciplines in the scholarly and academic domains.

Routledge is proud to have launched this series since 2003 to widen in-depth analyses and understanding of the economic and political dynamics of this important region. The aim of the series is to publish both specialist and more general titles covering a wide range of issues relating to the political economy of the Middle East and North Africa region. It will feature the latest political economy studies of the Middle East defined to encompass countries from Morocco to Iran.

Submissions from prospective authors are welcomed, and should be sent in the first instance to the series editor ([email protected]). The series will be open to single-authored books as well as edited volumes and textbooks.  All manuscripts will be subject to international standards of peer review.