Ecotoxicology
Effects of Pollutants on the Natural Environment

Ecotoxicology: Effects of Pollutants on the Natural Environment

Pesticides and other industrial chemicals are at the root of many pollution problems. In view of the toxic effects of industrial chemicals found in the water, soil, and air, Ecotoxicology: Effects of Pollutants on the Natural Environment considers the impact of chemicals on the environment from a wider perspective: the evolution of plant toxins—and defense mechanisms against them in animals as a consequence of plant–animal warfare. Comparisons are made between this and the development of resistance by insects towards man-made insecticides.

The text focuses particularly on problems posed by pesticides and, to a lesser extent, by drugs. This material specifically addresses the problems that pesticides pose and explores the development of resistance to them. It focuses on the history of pesticides, pesticide selectivity between target species and beneficial organisms, and types of pesticides. It discusses mandatory ecotoxicity testing as part of the process of risk assessment of environmental chemicals. The text considers the effects of pollutants at the population level, with respect to changes in numbers and genetic composition. It factors in the sublethal effects of pollutants on population levels, and cites an increase in the concentration of persistent pollutants in natural food chains as a cause of the decline of certain vertebrate predators.

Divided into three sections, this text uses a variety of examples and case studies to examine the effects of pollutants—including naturally occurring ones—on natural processes. It guides the reader through the basic issues and principles; outlines the science of ecotoxicology, which is the study of the effects of chemicals upon ecosystems; and introduces various strategies for pollution control.

Colin Walker originally qualified as an agricultural chemist. He was responsible for chemical and biochemical studies of environmental pollutants at the Monk’s Wood Experimental Station during the mid-1960s when certain effects of organochlorine insecticides were established. This work led to restrictions on the use of cyclodienes and DDT. He subsequently joined the University of Reading where he taught and conducted research on the molecular basis of toxicity with particular reference to ecotoxicology. Now retired, he is currently affiliated with the Department of Biosciences at the University of Exeter where he contributes to the teaching of a course in ecotoxicology. 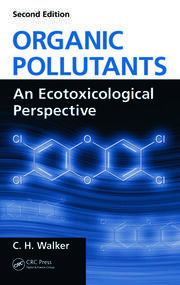 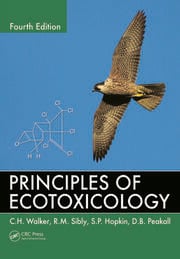