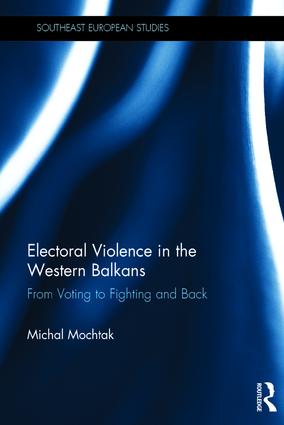 Electoral Violence in the Western Balkans

From Voting to Fighting and Back, 1st Edition

Since the end of the Cold War there have been a number of cases where the democratization process has been turbulent, or even violent. Addressing electoral violence, its evolution and impact in the Western Balkans, this book explores the conflict logic of election and tries to understand its basic patterns. Two decades of electoral competition in the region are analysed to identify an interesting evolution of electoral violence in terms of forms, actors, motivations and dynamics.

By identifying the potential drivers of electoral violence and explaining the escalation and stimulus of violence-related events, the author combines a theoretical approach with original data to emphasise the variability of the phenomenon and its evolution in the region.

The book will appeal to students and scholars of post-communist Europe and democratisation processes and the Western Balkans in particular. It should also be of interest to political advisors and those involved in developing or implementing democratisation programmes.

"Recent research has shown elections in a positive light – they are moments when democratic actors have an opportunity to defeat authoritarian and quasi-authoritarian rulers. Michal Mochtak, however, sheds light on a darker side of elections, their potential to provoke conflict and violence. This book provides nuanced arguments grounded in both data and qualitative fieldwork that will help policymakers to not only predict when electoral violence is going to occur, but also prevent it from happening." - Andrew Roberts, Northwestern University, USA.

"This comprehensive study of post-Communist electoral violence in the Western Balkans is a welcome addition to the literature which has tended to focus on Asia, Africa and Latin America. It is a salutary warning to optimists who expect strong external interest and support for democratic practices to ensure a smooth transformation to democracy." - John O’Loughlin, University of Colorado, USA.

"A must-read book for anybody interested in qualitative comparative analysis (QCA). In this insightful and empirically enormous work, Michal Mochtak explains why electoral violence emerges in some places and does not in others. This book generates both reflection and desire to research." - Julián Cárdenas, Freie Universität Berlin, Germany.

Chapter 2 – From Violence to Electoral Violence

Chapter 5 – Recipes for Electoral Violence in the Western Balkans