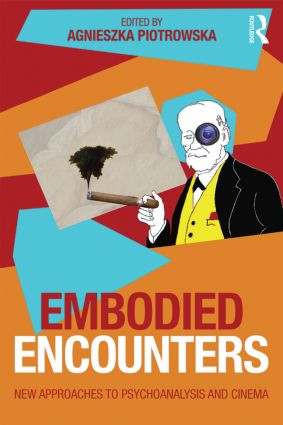 What is the role of the unconscious in our visceral approaches to cinema?

offers a unique collection of essays written by leading thinkers and writers in film studies, with a guiding principle that embodied and material existence can, and perhaps ought to, also allow for the unconscious. The contributors embrace work which has brought ‘the body’ back into film theory and question why psychoanalysis has been excluded from more recent interrogations.

The chapters included here engage with Jung and Freud, Lacan and Bion, and Klein and Winnicott in their interrogations of contemporary cinema and the moving image. In three parts the book presents examinations of both classic and contemporary films including Black Swan, Zero Dark Thirty and The Dybbuk:

Part 1 – The Desire, the Body and the Unconscious

Part 2 – Psychoanalytical Theories and the Cinema

is an eclectic volume which presents in one book the voices of those who work with different psychoanalytical paradigms. It will be essential reading for psychoanalysts and psychotherapists, scholars and students of film and culture studies and film makers.

‘Embodied Encounters represents a landmark moment in the intersection of psychoanalysis and film studies.  It is filled with unforgettable essays that will define how we think of the possibilities inherent in this intersection.  Though film theorists have often thought of the cinema in terms of psychoanalysis or the body, they have never brought these concerns together in the way that this volume edited by Agnieszka Piotrowska does.  Reading this book is requisite for anyone who wants to understand the body when it meets the screen.' - Todd McGowan, University of Vermont, USA

‘Agnieszka Piotrowska’s Embodied Encounters contains an extraordinarily rich and exciting collection of essays on the body, contemporary cinema and psychoanalysis that decisively advances film theory from the paradigm established by Screen and Slavoj Zizek. It does this by attending closely to Jacques Lacan’s late seminars stressing the ‘sinthome’ that marries the body to the unconscious, and by situating Lacan in the context of a broader psychoanalytic tradition. It is an important and timely collection that revitalizes psychoanalytic film theory for the twenty-first century, offering fresh engagements with leading auteurs and significant films.’ - Scott Wilson, Professor in Psychoanalysis and Media, Kingston University, London, UK

"Embodied Encounters is a timely collection, a significant statement of how important psychoanalysis is for illuminating what films do and of clarifying the effects and affects films can produce. One astonishing feature of this collection is its embrace of an impressive range of psychoanalytic approaches to the study of film. Also extraordinary is the range of films and filmmakers examined. Essential reading for anyone who cares about cinema."- Richard Rushton, Lancaster University, UK

Acknowledgements. Contributors’ Biographical Information. Introduction By the Editor. Part 1 - The Desire, the Body and the Unconscious. Emma Wilson, On Catherine Breillat, the Body and the Unconscious. Agnieszka Piotrowska, On Nachtraglikheit, Broomfield and Aileen Wuornos Elizabeth Cowie, On Embodied Documentary and Jerzy Grotowski. Julie Sexeny, On Jessica Benjamin and Black Swan. John Izod and Joanna Dogalis, On Jung, and the Embodiment in Terence Malick. Part 2 - Psychoanalytical Theories and the Cinema. Luke Hockley, On Somatic Cinema. Stephen Frosh, On Dybbuk and Partial Objects. Carla Ambrosio Garcia, On Jayne Parker and material encounter with film. Agnieszka Piotrowska, On Zero Dark Thirty and Lacan. Ben Tyrer, On Black Swanand Feminine Jouissance. Michael Renov, On Documentary and Psychoanalysis. Part 3 Reflections and Destructions, Mirrors and Transgressions. Robert Burgoyne, On Destroying and Creating in Douglas Gordon Cory Arcangel.Vicky Lebeau, On Winnicott and Lacan in the Mirror Stage. Carol MacGillivray On Entering the Screen through the Diasynochronscope. Helena Bassil-Morozow, On loss in Andrei Tarkovsky. Naomi Segal, On First and Second Person in We need to talk about Kevin. Nicholas Muellner, On the Non-film in the Psychoanalyst’s Head.

Dr Agnieszka Piotrowska is an internationally recognized award-winning theorist and film maker, best known for her documentary Married to the Eiffel Tower. She is a Reader in Film Theory and Practice at the University of Bedfordshire, UK and is the author of Psychoanalysis and Ethics in Documentary Film (Routledge, 2014). She was awarded her PhD from Birkbeck College, University of London under the supervision of Stephen Frosh and Laura Mulvey.