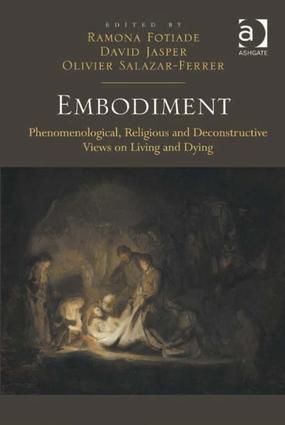 This book examines a number of landmark shifts in our account of the relationship between human and divine existence, as reflected through the perception of time and corporeal experience. Drawing together some of the best scholars in the field, this book provides a representative cross-section of influential trends in the philosophy of religion (e.g. phenomenology, existential thought, Biblical hermeneutics, deconstruction) that have shaped our understanding of the body in its profane and sacred dimensions as site of conflicting discourses on presence and absence, subjectivity and the death of the subject, mortality, resurrection and eternal life.

PART I: Michel Henry – The Phenomenology of Incarnation

1 The Search for a New Anthropological Paradigm: Michel Henry’s Reflections on Incarnation

2 The Incarnation of the Word and the A Priori of the Flesh: Michel Henry and the Problem of ‘Appearing Through’

3 Presentation of Michel Henry’s Notes on the Incarnation

Preparatory Notes to Incarnation: ‘The Archaeology of the Flesh, Finitude and the Question of Salvation’

4 The Incarnation of Life: The Phenomenology of Birth in Henry and Merleau-Ponty

7 Aesthetics and Corporal Strategies of Eros

8 From Embodiment to the Saturated Language

9 Cur Deus Homo? The Irrational Residue of Being: Reflections on Jean-Luc Marion and Shestov

11 Being Embodied and Being towards Death

13 Adoration and Phenomenology: The Dawn of an Adorable World

14 Between ‘God’s Phallus’ and ‘The Body of Christ’: The Embodied World of Contemporary African Literature in Achille Mbembe and Jean-Luc Nancy

15 ‘I Don’t Believe It!’: Faith, Belief and Embodiment in Pascal, Nietzsche and Heidegger

16 The Embodied Philosophy of Jean Grenier

Ramona Fotiade is a Senior Lecturer in French at the University of Glasgow. She was educated in Oxford where she wrote her DPhil thesis on the existential philosophy of Lev Shestov and Benjamin Fondane from the point of view of their critique of Husserlian phenomenology and their influential conception of life and faith in the relationship between man and God. Her book publications on this topic include: Conceptions of the Absurd. From Surrealism to the Existential Thought of Shestov and Fondane (2001), The Tragic Discourse: Shestov’s and Fondane’s Existential Thought (2006), and Léon Chestov et Vladimir Jankélévitch: du tragique Ã l’ineffable (2011).

David Jasper is a Professor of Literature and Theology at the University of Glasgow and the author of highly original interdisciplinary works that seek to articulate a postmodern theology incorporating views ranging from those of the earliest Christian theologians (the Fathers of the Desert, such as St Anthony) to the conception of the writers on the 'deserts' of the modern world, both geographical and interior. His recent publications include: The Sacred Desert (2004), The Sacred Body (2009) and The Sacred Community (2012).

Olivier Salazar-Ferrer is a Lecturer in French Literature and Philosophy at the University of Glasgow. He is the author of two monographic studies of the existential writer, visual artist and philosopher, Benjamin Fondane, and of a book of interviews with Michel Henry, which was published with De Corlevour in 2010. He has written extensively on the interface between literature, visual arts and philosophy, with particular reference to Merleau-Ponty, Levinas, Camus, Fondane, Calaferte, René Char and Saint-John Perse.