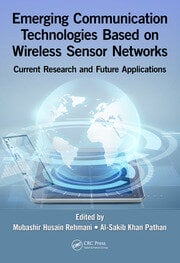 The first part covers the basics of wireless sensor networks and their principal working methods. The authors then move on to discuss different types of WSNs, characteristics of different types of emerging technologies based on WSNs, renewable energy sources, battery replenishment strategies, and application-specific energy challenges of WSNs. The second part is dedicated to issues related to wireless body area networks (WBANs). It discusses wearable WSNs and their applications, standards, and research trends. The authors also discuss routing schemes devised for WBANs and thermal-aware routing protocols for WBANs.

The third part focuses on different emerging communication technologies based on WSNs, including electromagnetic wireless nanosensor networks, WSNs in the IoT, management of WSNs through satellite networks, WSNs in smart homes, and cognitive radio technology in conjunction with WSNs. The last part of the book covers topics generally related to typical WSNs, including energy-efficient data collection in WSNs, key distribution mechanisms in WSNs, distributed data gathering algorithms for mobile WSNs, and finally, a novel mobility scheme for WSNs that supports IPv6.

Mubashir Husain Rehmani (M’14-SM’15) received the B.Eng. degree in computer systems engineering from Mehran University of Engineering and Technology, Jamshoro, Pakistan, in 2004, the M.S. degree from the University of Paris XI, Paris, France, in 2008, and the Ph.D. degree from the University Pierre and Marie Curie, Paris, in 2011. He is currently working as Assistant Lecturer at Cork Institute of Technology, Ireland. He worked from 2017 to 2018 as Post Doctoral Researcher at the Telecommunications Software and Systems Group (TSSG), Waterford Institute of Technology (WIT), Waterford, Ireland. He served for five years as an Assistant Professor at COMSATS Institute of Information Technology, Wah Cantt., Pakistan. He is currently an Area Editor of the IEEE Communications Surveys and Tutorials. He served for three years (from 2015 to 2017) as an Associate Editor of the IEEE Communications Surveys and Tutorials. Currently, he serves as Associate Editor of IEEE Communications Magazine, Elsevier Journal of Network and Computer Applications (JNCA), and the Journal of Communications and Networks (JCN). He is also serving as a Guest Editor of Elsevier Ad Hoc Networks Journal, Elsevier Future Generation Computer Systems journal, the IEEE Transactions on Industrial Informatics, and Elsevier Pervasive and Mobile Computing journal. He has authored or edited two books published by IGI Global, USA, one book published by CRC Press, USA, and one book with Wiley, U.K. He received "Best Researcher of the Year 2015 of COMSATS Wah" award in 2015. He received the certificate of appreciation, "Exemplary Editor of the IEEE Communications Surveys and Tutorials for the year 2015" from the IEEE Communications Society. He received Best Paper Award from IEEE ComSoc Technical Committee on Communications Systems Integration and Modeling (CSIM), in IEEE ICC 2017. He consecutively received research productivity award in 2016-17 and also ranked #1 in all Engineering disciplines from Pakistan Council for Science and Technology (PCST), Government of Pakistan. He also received Best Paper Award in 2017 from Higher Education Commission (HEC), Government of Pakistan.

Al-Sakib Khan Pathan earned his PhD degree in computer engineering in 2009 from Kyung Hee University, South Korea, and his BSc degree in computer science and information technology from the Islamic University of Technology (IUT), Bangladesh, in 2003. He is currently a faculty member (at large) at the Faculty of Computer and Information Systems at Islamic University in Madinah, Madinah al-Munawwarah, Kingdom of Saudi Arabia, and a visiting faculty at University of Asia Pacific, Bangladesh. From August 2010 to July 2015, he served as an assistant professor in the Computer Science Department at the International Islamic University Malaysia (IIUM), Malaysia.