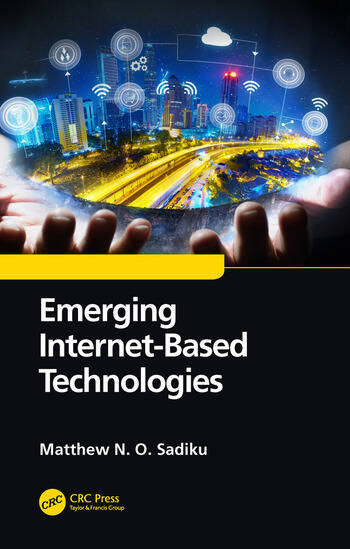 The author of this book has identified the seven key emerging Internet-related technologies: Internet of things, smart everything, big data, cloud computing, cybersecurity, software-defined networking, and online education. Together these technologies are transformational and disruptive. This book provides researchers, students, and professionals a comprehensive introduction, applications, benefits, and challenges for each technology. It presents the impact of these cutting-edge technologies on our global economy and its future. The word "technology" refers to "collection of techniques, skills, methods, and processes used in the production of goods or services."

Matthew N. O. Sadiku received his B. Sc. degree in 1978 from Ahmadu Bello University, Zaria, Nigeria and his M.Sc. and Ph.D. degrees from Tennessee Technological University, Cookeville, TN in 1982 and 1984 respectively. From 1984 to 1988, he was an assistant professor at Florida Atlantic University, Boca Raton, FL, where he did graduate work in computer science. From 1988 to 2000, he was at Temple University, Philadelphia, PA, where he became a full professor. From 2000 to 2002, he was with Lucent/Avaya, Holmdel, NJ as a system engineer and with Boeing Satellite Systems, Los Angeles, CA as a senior scientist. He is presently a professor of electrical and computer engineering at Prairie View A&M University, Prairie View, TX.

He is the author of over 440 professional papers and over 70 books including "Elements of Electromagnetics" (Oxford University Press, 7th ed., 2018), "Fundamentals of Electric Circuits" (McGraw-Hill, 6th ed., 2017, with C. Alexander), "Computational Electromagnetics with MATLAB" (CRC, 4th ed., 2018), "Metropolitan Area Networks" (CRC Press, 1995), and "Principles of Modern Communication Systems" (Cambridge University Press, 2017, with S. O. Agbo). In addition to the engineering books, he has written several Christian books. Some of his books have been translated into French, Korean, Chinese (and Chinese Long Form in Taiwan), Italian, Portuguese, and Spanish.

He was the recipient of the 2000 McGraw-Hill/Jacob Millman Award for outstanding contributions in the field of electrical engineering. He was also the recipient of Regents Professor award for 2012-2013 by the Texas A&M University System. He is a registered professional engineer, a fellow of IEEE, a member of ACM and ASEE. His current research interests are in the areas of computational electromagnetic, computer networks, and engineering education.