Emotions and their influence on our personal, interpersonal and social experiences 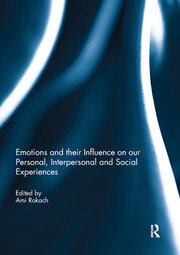 Emotions and their influence on our personal, interpersonal and social experiences

Research indicates that each emotion is associated with cognitive appraisals that influence our decision-making, our behavior and our relationships. Positive emotions may enhance our point of view and affect our decision to execute what we meant to. Negative emotions are known to not only affect the manner in which we view the world, but our plans, our willingness to interact with others, and our choices, both behaviorally, and cognitively. Emotions are also known to affect us physically. Positive emotions support our immune system, are responsible for our health enhancing behavior, and allow us to be open to our social support network. Negative emotions are known to hamper our immune system and thus make us more prone to illnesses, sometimes life threatening ones, and interfere with successfully coping with them. This book focuses on the role of emotions in everyday life, and particularly, the destructive effects of negative emotions such as anger, anxiety, depression, and the fear of death that humans share. The articles in this book were originally published in the Journal of Psychology: Interdisciplinary and Applied.

Introduction: Emotions and their effect in everyday life  1. Emotion Regulation Strategies, Secondary Traumatic Stress, and Compassion Satisfaction in Healthcare Providers  2. Facial Expressions of Emotions: Recognition Accuracy and Affective Reactions During Late Childhood  3. The Effect of Death Anxiety and Age on Health-Promoting Behaviors: A Terror-Management Theory Perspective  4. The Effects of Material and Experiential Discretionary Purchases on Consumer Happiness: Moderators and Mediators  5. Aggression among Male Alcohol-Dependent Inpatients who Smoke Cigarettes  6. Angry Versus Furious: A Comparison Between Valence and Arousal in Dimensional Models of Emotions  7. Faces of Shame: Implications for Self-Esteem, Emotion Regulation, Aggression, and Well-Being  8. The Myth of the Angry Atheist  9. Assessment of Anger Terms in Hebrew: A Gender Comparison  10. The Effects of Dysphoria and Personality on Negative Self-Referent Attitudes and Perceptions of the Attitudes of Others  11. Hope, Anger, and Depression as Mediators for Forgiveness and Social Behavior in Turkish Children  12. Hostility/Anger as a Mediator Between College Students’ Emotion Regulation Abilities and Symptoms of Depression, Social Anxiety, and Generalized Anxiety  13. Social Hierarchy and Depression: The Role of Emotion Suppression  14. Negatively Biased Emotion Perception in Depression as a Contributing Factor to Psychological Aggression Perpetration: A Preliminary Study

Ami Rokach is a Clinical Psychologist, specializing in treating and researching loneliness, anxiety conditions, and traumatic experiences. He is the Executive Editor of the Journal of Psychology: Interdisciplinary and Applied, and teaches in the Psychology Departments of York University, Canada; The Centre for Academic Studies, Israel; and Walden University, USA.