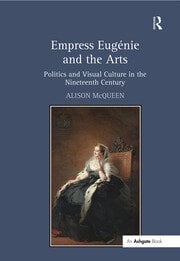 Empress Eugénie and the Arts: Politics and Visual Culture in the Nineteenth Century

Reconstructing Empress Eugénie's position as a private collector and a public patron of a broad range of media, this study is the first to examine Eugénie (1826-1920), whose patronage of the arts has been overlooked even by her many biographers. The empress's patronage and collecting is considered within the context of her political roles in the development of France's institutions and international relations. Empress Eugénie and the Arts: Politics and Visual Culture in the Nineteenth Century also examines representations of the empress, and the artistic transformation of a Hispanic woman into a leading figure in French politics. Based on extensive research at architectural sites and in archives, museums, and libraries throughout Europe, and in Britain and the United States, this book offers in-depth analysis of many works that have never before received scholarly attention - including reconstruction and analysis of Eugénie's apartment at the Tuileries. From her self-definition as empress through her collections, to her later days in exile in England, art was integral to Eugénie's social and political position.

Alison McQueen is Professor of Art History at McMaster University. She is author of The Rise of the Cult of Rembrandt: Reinventing an Old Master in Nineteenth-Century France (2003).

Winner of a Fondation Napoléon History Prize for 2011.

'The Empress Eugénie has found an able advocate in Alison McQueen, who places her squarely within the lineage of rulers and consorts of the modern period. As a result of her extensive research in previously unexplored sources and documents, McQueen has given us the first complete picture of Eugénie’s important role in the worlds of art and politics.' Patricia Mainardi, Graduate Center, City University of New York, USA

'Professor McQueen's important and highly readable book provides a necessary corrective to the views commonly held about Eugénie and her place in history. The close analysis of images reinforces the text which, thanks to Professor McQueen's thorough research, uses many previously untapped sources.' William H.C. Smith, University of London

'Empress Eugénie, wife of Napoléon III, was an essential participant in the history of France through her role in the arts. In this well-documented study of her buildings, her collections, and her patronage, Alison McQueen restores this controversial figure to her rightful place and makes us revisit a whole side of nineteenth-century French art that has been neglected by historians.' Michel Melot, Former Director of the Département des estampes et de la photographie, Bibliothèque nationale de France

'McQueen’s mission and accomplishment in this assiduously researched book is to reconstruct Empress Eugénie’s position as private collector and public patron during the 18 years of the Second Empire in which she reigned beside her husband. McQueen has taken the subject and shaken it hard and interestingly, to reveal new truths about Empress Eugénie; and her book is a valuable contribution to the bookshelf.' Cassone

'... McQueen has produced a valuable, readable, jargon-free text that will be appreciated by scholars of French history, art history, women's studies and many other fields. With the publication of McQueen's book, Eugenie has regained her rightful place in the history of nineteenth-century art and politics, to which she can now be clearly seen as a key figure in this history. It is apparent that McQueen has spent the last decade working diligently not only to restore Eugenie's reputation, but to reposition her as a crucial advocate for the arts, education, social justice and her husband's legacy during the almost twenty years she was empress and during fifty years that she lived after the fall of the Second Empire. McQueen has unquestionably reestablished Eugenie's reputation for future generations.' H-France

'... McQueen harnesses an impressive array of primary and secondary sources to correct basic facts... Readers will discover many unfamiliar 19th-century works of art that McQueen masterfully analyzes and incorporates into her argument... Recommended. Upper-division undergraduates through faculty.' Choice

'McQueen's book is especially noteworthy for her painstaking archival research, by which she reconstructs all of Eugenie's charitable and artistic commissions.' Woman's Art Journal

'This summary cannot do justice to the book, which presents an enormous wealth of surprising facts and insights about Eugenie's life and activities, nor to the complex, in-depth analyses of its selected artworks and projects. This combination of biographical information with discussions of a wide variety of artworks is, indeed, one of the book's greatest strengths. McQueen's study enriches our understanding of a woman of power and independence during the nineteenth century; a figure that stands out, even more so since the French were particularly anxious about female participation in politics... a fascinating account of how the public persona of empress Eugenie was constructed through artworks of all kinds.' Nineteenth-Century Art Worldwide

'In this pioneering study, Alison McQueen examines an important and yet largely overlooked phenomenon: the engagement with the visual arts of Empress Eugenie, wife of Napoleon III. McQueen draws upon her extensive work in the archives throughout Europe and years of sustained consideration of this subject to argue that Eugenie's patronage and collecting activities were distinctly political in nature, critical to the fashioning of her private and public personae, and central to the art world... with Empress Eugenie and the Arts: Politics and Visual Culture in the Nineteenth Century, McQueen presents a treasure trove of information on Eugenie's involvement with the visual arts, and this book will serve as an invaluable resource on the subject.' CAA Reviews

'... McQueen has undertaken ambitious investigation of primary sources and archival information. Existing misinformation is corrected, familiar topics are fleshed out, and new material is introduced... she opens new perspectives regarding the profound symbiosis of visual culture and the political under the Second Empire.' French Studies

'... its strengths are such that Empress Eugenie and the Arts will serve as a wonderful resource for scholars of Second Empire art, history, politics and gender studies.' Nineteenth Century French Studies