Enchantment and Dis-enchantment in Shakespeare and Early Modern Drama
Wonder, the Sacred, and the Supernatural 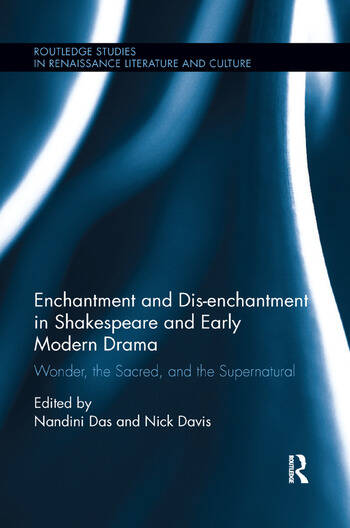 Enchantment and Dis-enchantment in Shakespeare and Early Modern Drama: Wonder, the Sacred, and the Supernatural

This volume addresses dealings with the wondrous, magical, holy, sacred, sainted, numinous, uncanny, auratic, and sacral in the plays of Shakespeare and contemporaries, produced in an era often associated with the irresistible rise of a thinned-out secular rationalism. By starting from the literary text and looking outwards to social, cultural, and historical aspects, it comes to grips with the instabilities of ‘enchanted’ and ‘disenchanted’ practices of thinking and knowledge-making in the early modern period. If what marvelously stands apart from conceptions of the world’s ordinary functioning might be said to be ‘enchanted’, is the enchantedness weakened, empowered, or modally altered by its translation to theatre? We have a received historical narrative of disenchantment as a large-scale early modern cultural process, inexorable in character, consisting of the substitution of a rationally understood and controllable world for one containing substantial areas of mystery. Early modern cultural change, however, involves transpositions, recreations, or fresh inventions of the enchanted, and not only its replacement in diminished or denatured form. This collection is centrally concerned with what happens in theatre, as a medium which can give power to experiences of wonder as well as circumscribe and curtail them, addressing plays written for the popular stage that contribute to and reflect significant contemporary reorientations of vision, awareness, and cognitive practice. The volume uses the idea of dis-enchantment/re-enchantment as a central hub to bring multiple perspectives to bear on early modern conceptualizations and theatricalizations of wonder, the sacred, and the supernatural from different vantage points, marking a significant contribution to studies of magic, witchcraft, enchantment, and natural philosophy in Shakespeare and early modern drama.

Introduction Nick Davis and Nandini Das 1. ‘Wondrous’ Healing: The ‘New Philosophy’ and Medicine on the Early Modern Stage Margaret Healy 2. Hamlet’s Enchanted Materialism Aaron Kitch 3. Demonism and Disenchantment in the First Part of the Contention Jesse Lander 4. ‘Magic of Bounty’: The Making of the Misanthrope as a Corporate Individual in Timon of Athens Joan Linton 5. ‘The wealthy magazine of nature’: Gunpowder and Other Wonders in John Fletcher’s The Island Princess (c. 1619-1621) Sarah Linwick 6. The Charm in Macbeth Eric Mallin 7. Ghost Stories and Living Monuments: Bringing Wonders to Life in The Winter's Tale Erin Minear 8. The Idea of Secularization in Shakespeare’s A Midsummer Night’s Dream and All’s Well That Ends Well Blair Morris 9. ‘Almost a miracle’: Redemption in The Winter’s Tale Sara Saylor 10. Moriens, Martyr or Monster? Working on Richard II's Dead Body in the Henriad Maggie Vinter 11. Understanding Apollo: the Gods in Shakespeare’s Winter’s Tale and Euripides’ Alcestis Susanne Wofford 12. ‘The Dead Shadow’: Enchanted Vision and the Poisoned Portrait in The White Devil Chloe Porter

Nandini Das is Professor of English Literature at the University of Liverpool, UK.

Nick Davis is a Senior Lecturer in English Literature at the University of Liverpool, UK. A member of the Group for Research in Literature, Psychology and Medical Humanities, he co-edits The International Journal of Literature and Psychology.