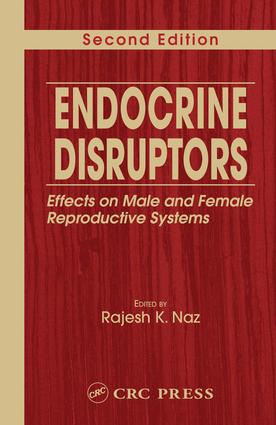 There is great concern regarding the reproductive and health hazards of endocrine disruptors. Research indicates that men are experiencing declining fertility and an increased incidence of prostate cancer, while women are dealing with increased infertility, early menopause, and breast cancer. As new research reveals the previously unknown risks of

Rajesh K. Naz, Ph.D. , is Professor of Obstetrics and Gynecology, and Physiology, as well as Director of the Division of Research at the Medical College of Ohio in Toledo. Dr. Naz received his B.S. and M.S. degrees in biochemistry in 1973 and 1975, respectively. He received his Ph.D. in immunology in 1980 from the prestigious All India Institute of Medical Sciences in New Delhi, under the guidance of the renowned reproductive endocrinologist G.P. Talwar. In 1984, following postdoctoral work in reproductive immunology at the University of Michigan Medical School in Ann Arbor and then at the Oregon Regional Primate Research Center at Beaverton, he was appointed Assistant Professor and Director of the In Vitro Fertilization and Andrology Laboratories at the George Washington University in Washington, D.C. He joined the Albert Einstein College of Medicine in 1987 and was promoted to Associate Professor and Director of Research in 1989. He moved to the Medical College of Ohio in 1996. Dr. Naz is a member of the Society for Gynecologic Investigation, American Society of Biochemistry and Molecular Biology, American Society for the Immunology of Reproduction, International Society for the Immunology of Reproduction, American Society of Reproductive Medicine, American Society of Andrology, Society for the Study of Reproduction, Endocrine Society, American Association for the Advancement of Science, and the New York Academy of Sciences. Dr. Naz has lectured on reproductive immunology at numerous national and international symposia and at various conferences. He has received many prestigious awards and honors, and is a scientific reviewer for various grant proposals and research manuscripts for journals. He also is the member of the editorial boards of seven journals including Biology of Reproduction and Archives of Andrology , and is the associate editor of Frontiers in BioScience , Human Reproduction , and Molecular Reproduction and Development. He has served in several study sections of the National Institutes of Health, including chairman of the Special Emphasis Panel SBIR Study Section. He has also served as a regular member of NIH’s Reproductive Endocrinology Study Section. Dr. Naz has published over 160 articles in scientific journals, as well as authoring and editing four books: Immunology of Reproduction , Male Reproductive Medicine: From Spermatogenesis to Sperm Function and Modulation of Fertility , Prostate: Basic and Clinical Aspects , and Endocrine Disruptors: Effects on Male and Female Reproductive Systems . His current interests include the molecular mechanisms underlying endocrinologic and immunologic control of fertility and infertility, and benign prostate hyperplasia (BPH) and prostate cancer in humans. He is especially interested in how the endocrine disruptors and environmental toxins can modify the male and female reproductive systems.