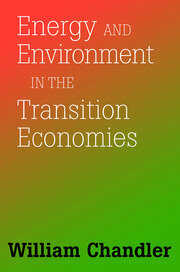 Energy And Environment In The Transition Economies: Between Cold War And Global Warming

Energy and environmental issues in the former Soviet sphere rank as global policy priorities for three reasons. First, civilian application of military nuclear materials multiplies the threat of terrorism. Second, Russian and Caspian oil resources affect world markets, Western energy security, and regional stability. Third, climate change may become a global challenge commensurate with the Cold War, and the transition economies--the former Soviet Union and Eastern Europe--offer the world's largest and cheapest near-term opportunities for curbing greenhouse gas emissions. Yet, the region remains unprepared to deal with these issues, and Western assistance has failed to help. A "second generation" of reform efforts is needed, led from within, but supported by the West. In Energy and Environmental Policies in the Transition Economies William Chandler synthesizes disparate, specialized analyses and publications. He draws on a relatively large body of research on energy technology, oil and gas markets, geopolitics, finance, economic reform, and environmental science specific to Russia, eastern Europe, and the transition economies. In successive chapters Chandler reviews energy use, energy efficiency, nuclear safety and security, petroleum geoeconomics, coal, utility monopoly and competition, and environmental and climatic change in the former Soviet Union and Central and Eastern Europe. Chandler also considers options for a "second generation" of reform efforts. The subject matter of the book is significant not only for the energy and environmental policies themselves, important though they are, but because those policies in turn affect regional political stability and Western energy security. Energy and Environmental Policies in the Transition Economies will be of considerable interest to policymakers in government, to private-sector actors, to academic scholars, and to students of international energy and environmental politics.