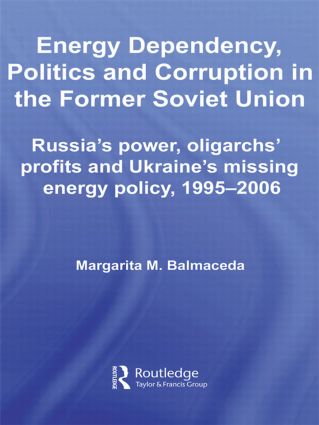 Energy Dependency, Politics and Corruption in the Former Soviet Union

Energy has become a major element to Russia's attempts, under Putin, to restore its influence over former Soviet territories and reaffirm itself as the dominant regional power. This book investigates how Russia has manipulated the energy of its neighbours on Russian energy supplies to achieve its foreign policy goals, focusing in particular on relations with Ukraine. This book, based on a multitude of primary Ukrainian and Russian primary sources until now not brought to the attention of Western readers, examines important events such as Russia's January 2006 suspension of gas supplies to Ukraine, and the implications for Ukraine's 'Orange Revolution', other post-Soviet states and Western Europe. However, it goes further in showing how domestic political conditions in non-Russian states may facilitate Russia's use of energy as a foreign policy weapon, investigating the local groups that often receive significant profits from allowing Russia to control energy markets and energy transit possibilities. With European countries becoming more dependent upon Russian energy, this book will be of interest not only to Russian Studies and Eastern European Studies experts, but to scholars of international relations and European politics.

'The author provides an exceptionally detailed documentation of the impact of energy dependency on Ukrainian economic and political development during the Kuchma and early Yushchenko presidencies.]…[Given the central role of energy dependency in post-Soviet politics, the book will be of interest not only to students of Ukrainian and Russian affairs but also of European energy policy at large.' - NATHANIEL TRUMBULL, Europe-Asia Studies, Volume 61, 2009

Margarita M. Balmaceda is Associate Professor in the John C. Whitehead School of Diplomacy and International Relations, Seton Hall University, and an Associate of the Harvard Ukrainian Research Institute and of the Davis Center for Russian Studies at Harvard University. Her numerous publications on Russian, post-Soviet and East European politics include On the Edge: the Ukrainian-Central European-Russian Security Triangle (2000) and Independent Belarus: Domestic Determinants, Regional Dynamics and Implications for the West (2002). She has taught and conducted research extensively in the Central-East European region, including through Fulbright and other grants in Russia, Ukraine, Belarus, Hungary and Lithuania.