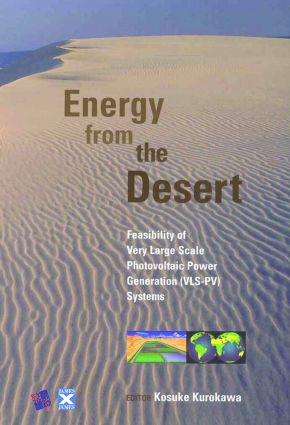 Energy from the Desert

The world's deserts are sufficiently large that, in theory, covering a fraction of their landmass with PV systems could generate many times the current primary global energy supply.

This Energy from the Desert volume examines and evaluates the potential of very large scale photovoltaic power generation (VLS-PV) systems. Following from the success of the first book on the subject, the authors present practical case studies of both virtual and real projects based on selected regions (including the Mediterranean, the Middle East, the Gobi Desert and Western Australia) and their specific socio-economic dynamics, and argue that VLS-PV systems in desert areas will be readily available in the near future.

As the essential companion to the previous International Energy Agency (IEA) volume it reiterates and develops key concepts introduced by the original study and provides firm practical recommendations to achieve long-term targets for policy-makers and investors.

Never has very large scale photovoltaics received such an exhaustive analysis.' Photon International, from review of the first volume 'Well illustrated throughout, the book shows how large scale PV systems can become economically and technologically feasible'. The Environmentalist

Kosuke Kurokawa has over 30 years of experience in energy systems technology, including HVDC transmission and solar photovoltaics. In recent years he has researched a wide variety of photovoltaic systems, from small AC modules to very large scale PV systems, at the Tokyo University of Agriculture and Technology. Professor Kurokawa received the PVSEC award at the 4th World Conference on Photovoltaic Energy Conversion in Waikoloa, Hawaii, in May 2006. He is the Operating Agent of the IEA PVPS Task 8 project on VLS-PV, and chairman for a number of technical committees. Keiichi Komoto has contributed to VLS-PV activity since its preliminary stages. He currently works as a senior consultant in the field of renewable energy for Mizuho Information and Research Institute, and is focusing on photovoltaic technology from environmental and socio-economic viewpoints. Peter van der Vleuten has an extensive background in photovoltaics: as president of Free Energy Europe he gained experience with the development, manufacture and worldwide marketing of thin film silicon module, while his presidency of Free Energy International involved him in strategy and finance in the field of solar electricity, as well as in joint research and development projects. As chairman of the Free Energy Foundation, Peter's focus has been on awareness campaigns and dealer support in rural areas in developing countries. He has been involved in work on VLS-PV for desert applications from the beginning, some 8 years ago, and has enjoyed contributing significantly to the IEA Task 8 project, being eager to see the first gigawatt projects appear, which he believes could take place much earlier than many people have expected. David Faiman is a professor of physics at Ben-Gurion University of the Negev and director of Israel's National Solar Energy Center. He was a founder member, 30 years ago, of the university's Jacob Blaustein Institutes for Desert Research at Sede Boqer, whose Department of Solar Energy and Environmental Physics he heads.