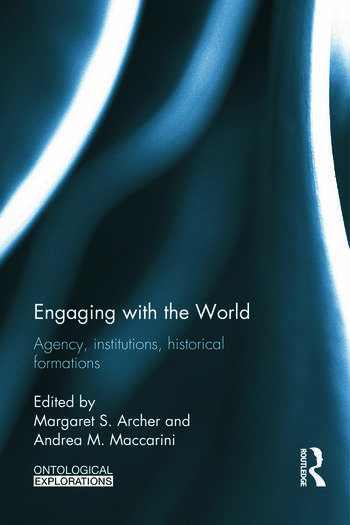 This title reflects the general theme of the 2010 IACR annual conference that was held in Padova, Italy, the aim of which was to provide a fresh view on some cultural and structural changes involving Western societies after the world economic crisis of 2008, from the point of view of Critical Realism.

Global society is often regarded as disrupting identities and blurring boundaries, one which entails giving up ideas of structure and fixity. Globalization supposedly introduces a "liquid" era of fluidity where everything is possible, and anything goes. Nevertheless, its current dynamics are developing into a harder reality: wars, economic crisis, the haunting risk of pandemics, the ever worsening food supply crisis, and the environmental challenge. These social facts call for a dramatic shift in the optimistic cosmopolitan mood and the thought that we can build and rebuild ourselves and our world as we please, at least for the most developed countries. The challenges we face produce new forms of social life and individual experience. They also require us to develop new frameworks to analyze emergent contexts, institutional complexes and morphogenetic fields, and new ways to understand human agency and the meaning of emancipation.

The first, "Social Ontology and a New Historical Formation", deals with mainly social ontological issues, insofar as they are connected to social scientific and public issues in the emerging society of the XXI century.

The second, "Being human and the adventure of agency", is concerned with the way human beings adapts to the "new world" of "our times", and comes up with innovative models of agency and socialization.

The third, "The constitutionalization of the new world", explores critical realist perspectives, as compared to system-theoretical ones, on the issue of global order and justice.

In all of this, the challenge is to engage with this "new world" in a meaningful way, a task for which a realist mind set is badly needed. Critical realism provides a strong theoretical framework that can meet the challenge, and the book explores its contribution to making sense of, and coming to terms with, this historical formation.

1. Introduction: Engaging with the World: Critical Social Science in the Wake of the ‘Big Crisis’ of ‘Our Times’ by Andrea M. Maccarini PART I 2. Prolegomenon; The consequences of the revindication of philosophical ontology for philosophy and social theory by Roy Bhaskar  3. A Morphogenetic-Relational Account of Social Emergence. Processes and Forms by Andrea M. Maccarini  4. Reflexive Social Subjectivities by Riccardo Prandini PART II 5. Realist Engagements in Critical Hermeneutics by Frédéric Vandenberghe  6. Re-conceptualizing Socialization as Reflexive Engagement by Margaret S. Archer  7. Engagement as a Social Relation: A Leap into Trans-modernity by Pierpaolo Donati PART III 8. The Human Being Invested in Social Forms: Four Extensions of the Notion of Engagement by Laurent Thévenot  9. The New World Order: What Role for Critical Realism? by Douglas V. Porpora  10. Complex governance and Europe’s model of subsidiarity by Helmut Willke

Margaret S. Archer is Professor at the Centre for Social Ontology, École Polytechnique Fédérale de Lausanne.  She has written and edited several books for Routledge, including Conversations About Reflexivity.